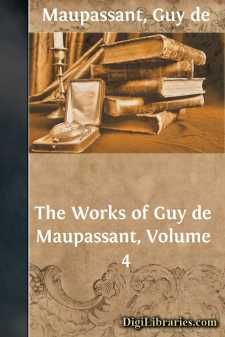 Count Eustache d'Etchegorry's solitary country house had the appearance of a poor man's home, where people do not have enough to eat every day in the week, where the bottles are more frequently filled at the pump than in the cellar, and where they wait until it is dark before lighting the candles.

It was an old and sordid building; the walls were crumbling to pieces, the grated, iron gates were eaten away by rust, the holes in the broken windows had been mended with old newspapers, and the ancestral portraits which hung against the walls, showed that it was no tiller of the soil, nor miserable laborer whose strength had gradually worn out and bent his back, who lived there. Great, knotty elm trees sheltered it, as if they had been a tall, green screen, and a large garden, full of wild rose-trees and of straggling plants, as well as of sickly-looking vegetables, which sprang up half-withered from the sandy soil, went down as far as the bank of the river.

From the house, one could hear the monotonous sound of the water, which at one time rushed yellow and impetuous towards the sea, and then again flowed back, as if driven by some invisible force towards the town which could be seen in the distance, with its pointed spires, its ramparts, and its ships at anchor by the side of the quay, and its citadel built on the top of a hill.

A strong smell of the sea came from the offing, mingled with the resinous smell of pine logs, and of the large nets with great pieces of sea-weed clinging to them, which were drying in the sun.

Why had Monsieur d'Etchegorry, who did not like the country, who was of a sociable rather than of a solitary nature, for he never walked alone, but kept step with the retired officers who lived there, and frequently played game after game at piquet at the café, when he was in town, buried himself in such a solitary place, by the side of a dusty road at Boucau, a village close to the town, where on Sundays the soldiers took off their tunics, and sat in their shirt sleeves in the public-houses, drank the thin wine of the country, and teased the girls.

What secret reasons had he for selling the mansion which he had possessed at Bayonne, close to the bishop's palace, and condemning his daughter, a girl of nineteen, to such a dull, listless, solitary life; counting the minutes far from everybody, as if she had been a nun, no one knew, but most people said that he had lost immense sums in gambling, and had wasted his fortune and ruined his credit in doubtful speculations. They wondered whether he still regretted the tender, sweet woman whom he had lost, who died one evening, after years of suffering, like a church lamp whose oil has been consumed to the last drop. Was he seeking for perfect oblivion, for that soothing repose in nature, in which a man becomes enervated, and which envelopes him like a moist, warm cloth? How could he be satisfied with such an existence? With the bad cooking, and the careless, untidy ways of a char-woman, and with the shabby clothes, that were discolored by use!

His numerous relations had been anxious about it at first, and had tried to cure him of his apparent hypochondria, and to persuade him to employ himself with something, but as he was obstinate, avoided them, rejected their friendly offers with arrogance and self-sufficiency, even his brothers had abandoned him, and almost renounced him....