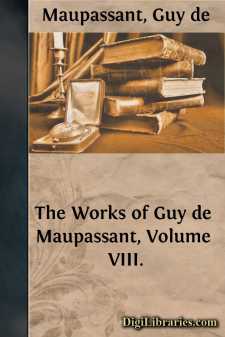 do not intend in these pages to put in a plea for this little novel. On the contrary, the ideas I shall try to set forth will rather involve a criticism of the class of psychological analysis which I have undertaken in Pierre et Jean. I propose to treat of novels in general.

I am not the only writer who finds himself taken to task in the same terms each time he brings out a new book. Among many laudatory phrases, I invariably meet with this observation, penned by the same critics: "The greatest fault of this book is that it is not, strictly speaking, a novel."

"The greatest fault of the writer who does me the honor to review me is that he is not a critic."

For what are, in fact, the essential characteristics of a critic?

It is necessary that, without preconceived notions, prejudices of "School," or partisanship for any class of artists, he should appreciate, distinguish, and explain the most antagonistic tendencies and the most dissimilar temperaments, recognizing and accepting the most varied efforts of art.

Now the Critic who, after reading Manon Lescaut, Paul and Virginia, Don Quixote, Les Liaisons dangereuses, Werther, Elective Affinities (Wahlverwandschaften), Clarissa Harlowe, Émile, Candide, Cinq-Mars, René, Les Trois Mousquetaires, Mauprat, Le Père Goriot, La Cousine Bette, Colomba, Le Rouge et le Noir, Mademoiselle de Maupin, Notre-Dame de Paris, Salammbo, Madame Bovary, Adolphe, M. de Camors, l'Assommoir, Sapho, etc., still can be so bold as to write "This or that is, or is not, a novel," seems to me to be gifted with a perspicacity strangely akin to incompetence. Such a critic commonly understands by a novel a more or less improbable narrative of adventure, elaborated after the fashion of a piece for the stage, in three acts, of which the first contains the exposition, the second the action, and the third the catastrophe or dénouement.

And this method of construction is perfectly admissible, but on condition that all others are accepted on equal terms.

Are there any rules for the making of a novel, which, if we neglect, the tale must be called by another name? If Don Quixote is a novel, then is Le Rouge et le Noir a novel? If Monte Christo is a novel, is l'Assommoir? Can any conclusive comparison be drawn between Goethe's Elective Affinities, The Three Mousqueteers, by Dumas, Flaubert's Madame Bovary, M. de Camors by Octave Feuillet, and Germinal, by Zola? Which of them all is The Novel? What are these famous rules? Where did they originate? Who laid them down? And in virtue of what principle, of whose authority, and of what reasoning?

And yet, as it would appear, these critics know in some positive and indisputable way what constitutes a novel, and what distinguishes it from other tales which are not novels. What this amounts to is that without being producers themselves they are enrolled under a School, and that, like the writers of novels, they reject all work which is conceived and executed outside the pale of their esthetics. An intelligent critic ought, on the contrary, to seek out everything which least resembles the novels already written, and urge young authors as much as possible to try fresh paths.

All writers, Victor Hugo as much as M. Zola, have insistently claimed the absolute and incontrovertible right to compose—that is to say, to imagine or observe—in accordance with their individual conception of originality, and that is a special manner of thinking, seeing, understanding, and judging. Now the critic who assumes that "the novel" can be defined in conformity with the ideas he has based on the novels he prefers, and that certain immutable rules of construction can be laid down, will always find himself at war with the artistic temperament of a writer who introduces a new manner of work. A critic really worthy of the name ought to be an analyst, devoid of preferences or passions; like an expert in pictures, he should simply estimate the artistic value of the object of art submitted to him. His intelligence, open to everything, must so far supersede his individuality as to leave him free to discover and praise books which as a man he may not like, but which as a judge he must duly appreciate.

But critics, for the most part, are only readers; whence it comes that they almost always find fault with us on wrong grounds, or compliment us without reserve or measure....