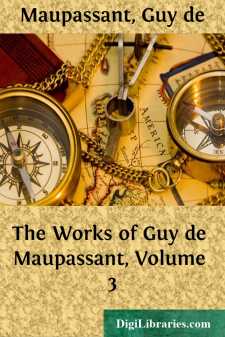 "After all," Count d'Avorsy said, stirring his tea with the slow movements of a prelate, "what truth was there in anything that was said at Court, almost without any restraint, and did the Empress, whose beauty has been ruined by some secret grief, who will no longer see anyone and who soothes her continual mental weariness by some journeys without an object and without a rest, in foggy and melancholy islands, and did she really forget Caesar's wife ought not even to be suspected, did she really give herself to that strange and attractive corrupter, Ladislas Ferkoz?"

The bright night seemed to be scattering handfuls of stars into the placid sea, which was as calm as a blue pond, slumbering in the depths of a forest. Among the tall climbing roses, which hung a mantle of yellow flowers to the fretted baluster of the terrace, there stood out in the distance the illuminated fronts of the hotels and villas, and occasionally women's laughter was heard above the dull, monotonous sound of surf and the noise of the fog-horns.

Then Captain Sigmund Oroshaz, whose sad and pensive face of a soldier who has seen too much slaughter and too many charnel houses, was marked by a large scar, raised his head and said in a grave, haughty voice:

"Nobody has lied in accusing Maria-Gloriosa of adultery, and nobody has calumniated the Empress and her minister, whom God has damned in the other world. Ladislas Ferkoz was his sovereign's lover until he died, and made his august master ridiculous and almost odious, for the man, no matter who he be, who allows himself to be flouted by a creature who is unworthy of bearing his name and of sharing his bread; who puts up with such disgrace, who does not crush the guilty couple with all the weight of his power, is not worth pity, nor does he deserve to be spared the mockery. And if I affirm that so harshly, my dear Count—although years and years have passed since the sponge passed over that old story—the reason is that I saw the last chapter of it, quite in spite of myself, however, for I was the officer who was on duty at the palace, and obliged to obey orders, just as if I had been on the field of battle—and on that day I was on duty near Maria-Gloriosa."

Madame de Laumières, who had begun an animated conversation on crinolines, admist the fragrant odor of Russian cigarettes, and who was making fun of the striking toilets, with which she had amused herself by scanning through her opera glass a few hours previously at the races, stopped, for even when she was talking most volubly she always kept her ears open to hear what was being said around her, and as her curiosity was aroused, she interrupted Sigmund Oroshaz.

"Ah! Monsieur," she said, "you are not going to leave our curiosity unsatisfied.... A story about the Empress puts all our scandals on the beach, and all our questions of dress into the shade, and, I am sure," she added with a smile at the corners of her mouth, "that even our friend, Madame d'Ormonde will leave off flirting with Monsieur Le Brassard to listen to you."

"It was in the middle of a grand ball that the Emperor was giving on the occasion of some family anniversary, though I forget exactly what, and where Maria-Gloriosa, who was in great grief, as she had heard that her lover was ill and his life almost despaired of, far from her, was going about with her face as pale as that of Our Lady of Sorrows, seemed to be a soul in affliction, appeared to be ashamed of her bare shoulders, as if she were being made a parade of in the light, while he, the adored of her heart, was lying on a bed of sickness, getting weaker every moment, longing for her and perhaps calling for her in his distress....