The Works of Guy de Maupassant, Vol. 1 Boule de Suif and Other Stories 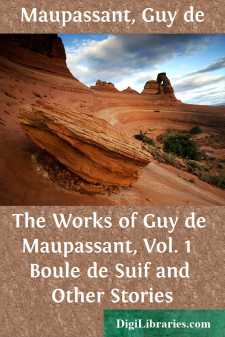 The first aim of art, no doubt, is the representation of things as they are. But then things are as our eyes see them and as our minds make them; and it is thus of primary importance for the critic to distinguish the precise qualities of the eyes and minds which make the world into imaginative literature. Reality may be so definite and so false, just as it may be so fantastic and so true; and, among work which we can apprehend as dealing justly with reality, there may be quite as much difference in all that constitutes outward form and likeness as there is between a Dutch interior by Peter van der Hooch, the portrait of a king by Velasquez, and the image of a woman smiling by Leonardo da Vinci. The soul, for instance, is at heart as real as the body; but, as we can hear it only through the body speaking, and see it only through bodily eyes, and measure it, often enough, only in the insignificant moment of its action, it may come to seem to us, at all events less realizable; and thus it is that we speak of those who have vividly painted exterior things as realists. Properly speaking, Maupassant is no more a realist than Maeterlinck. He paints a kind of reality which it is easier for us to recognize; that is all.

Every artist has his own vision of the world. Maupassant's vision was of solid superficies, of texture which his hands could touch, of actions which his mind could comprehend from the mere sight of its incidents. He saw the world as the Dutch painters saw it, and he was as great a master of form, of rich and sober color, of the imitation of the outward gestures of life, and of the fashion of external things. He had the same view of humanity, and shows us, with the same indifference, the same violent ferment of life—the life of full-blooded people who have to elbow their way through the world. His sense of desire, of greed, of all the baser passions, was profound: he had the terrible logic of animalism. Love-making, drunkenness, cheating, quarreling, the mere idleness of sitting drowsily in a chair, the gross life of the farmyard and the fields, civic dissensions, the sordid provincial dance of the seven deadly sins, he saw in the same direct, unilluminating way as the Dutch painters; finding, indeed, no beauty in any of these things, but getting his beauty in the deft arrangement of them, in the mere act of placing them in a picture. The world existed for him as something formless which could be cut up into little pictures. He saw no farther than the lines of his frame. The interest of the thing began inside that frame, and what remained outside was merely material.

A story of Maupassant, more than almost anything in the world, gives you the impression of manual dexterity. It is adequately thought out, but it does not impress you by its thought; it is clearly seen, but it does not impress you specially by the fidelity of its detail; it has just enough of ordinary human feeling for the limits it has imposed on itself. What impresses you is the extreme ingenuity of its handling; the way in which this juggler keeps his billiard-balls harmoniously rising and falling in the air. Often, indeed, you cannot help noticing the conscious smile which precedes the trick, and the confident bow which concludes it. He does not let you into the secret of the trick, but he prevents you from ignoring that it is after all, only a trick which you have been watching.

There is a philosophy of one kind or another behind the work of every artist. Maupassant's was a simple one, sufficient for his needs as he understood them, though perhaps really consequent upon his artistic methods, rather than at the root of them. It was the philosophy of cynicism: the most effectual means of limiting one's outlook, of concentrating all one's energies on the task in hand. Maupassant wrote for men of the world, and men of the world are content with the wisdom of their counting-houses. The man of the world is perfectly willing to admit that he is no better than you, because he takes it for granted that you will admit yourself to be no better than he. It is a way of avoiding comparison. To Maupassant this cynical point of view was invaluable for his purpose. He wanted to tell stories just for the pleasure of telling them; he wanted to concern himself with his story simply as a story; incidents interested him, not ideas, nor even characters, and he wanted every incident to be immediately effective....