The Victorian Age in Literature 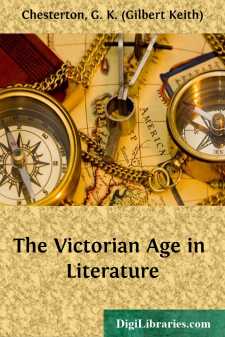 A section of a long and splendid literature can be most conveniently treated in one of two ways. It can be divided as one cuts a currant cake or a Gruyère cheese, taking the currants (or the holes) as they come. Or it can be divided as one cuts wood—along the grain: if one thinks that there is a grain. But the two are never the same: the names never come in the same order in actual time as they come in any serious study of a spirit or a tendency. The critic who wishes to move onward with the life of an epoch, must be always running backwards and forwards among its mere dates; just as a branch bends back and forth continually; yet the grain in the branch runs true like an unbroken river.

Mere chronological order, indeed, is almost as arbitrary as alphabetical order. To deal with Darwin, Dickens, Browning, in the sequence of the birthday book would be to forge about as real a chain as the "Tacitus, Tolstoy, Tupper" of a biographical dictionary. It might lend itself more, perhaps, to accuracy: and it might satisfy that school of critics who hold that every artist should be treated as a solitary craftsman, indifferent to the commonwealth and unconcerned about moral things. To write on that principle in the present case, however, would involve all those delicate difficulties, known to politicians, which beset the public defence of a doctrine which one heartily disbelieves. It is quite needless here to go into the old "art for art's sake"—business, or explain at length why individual artists cannot be reviewed without reference to their traditions and creeds. It is enough to say that with other creeds they would have been, for literary purposes, other individuals. Their views do not, of course, make the brains in their heads any more than the ink in their pens. But it is equally evident that mere brain-power, without attributes or aims, a wheel revolving in the void, would be a subject about as entertaining as ink. The moment we differentiate the minds, we must differentiate by doctrines and moral sentiments. A mere sympathy for democratic merry-making and mourning will not make a man a writer like Dickens. But without that sympathy Dickens would not be a writer like Dickens; and probably not a writer at all. A mere conviction that Catholic thought is the clearest as well as the best disciplined, will not make a man a writer like Newman. But without that conviction Newman would not be a writer like Newman; and probably not a writer at all. It is useless for the æsthete (or any other anarchist) to urge the isolated individuality of the artist, apart from his attitude to his age. His attitude to his age is his individuality: men are never individual when alone.

It only remains for me, therefore, to take the more delicate and entangled task; and deal with the great Victorians, not only by dates and names, but rather by schools and streams of thought. It is a task for which I feel myself wholly incompetent; but as that applies to every other literary enterprise I ever went in for, the sensation is not wholly novel: indeed, it is rather reassuring than otherwise to realise that I am now doing something that nobody could do properly....