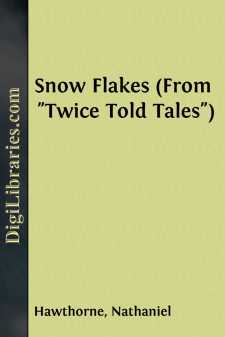 There is snow in yonder cold gray sky of the morning!-and, through the partially frosted window-panes, I love to watch the gradual beginning of the storm. A few feathery flakes are scattered widely through the air, and hover downward with uncertain flight, now almost alighting on the earth, now whirled again aloft into remote regions of the atmosphere. These are not the big flakes, heavy with moisture, which melt as they touch the ground, and are portentous of a soaking rain. It is to be, in good earnest, a wintry storm. The two or three people, visible on the side-walks, have an aspect of endurance, a blue-nosed, frosty fortitude, which is evidently assumed in anticipation of a comfortless and blustering day. By nightfall, or at least before the sun sheds another glimmering smile upon us, the street and our little garden will be heaped with mountain snow-drifts. The soil, already frozen for weeks past, is prepared to sustain whatever burden may be laid upon it; and, to a northern eye, the landscape will lose its melancholy bleakness and acquire a beauty of its own, when Mother Earth, like her children, shall have put on the fleecy garb of her winter's wear. The cloud-spirits are slowly weaving her white mantle. As yet, indeed, there is barely a rime like hoarfrost over the brown surface of the street; the withered green of the grass-plat is still discernible; and the slated roofs of the houses do but begin to look gray, instead of black. All the snow that has yet fallen within the circumference of my view, were it heaped up together, would hardly equal the hillock of a grave. Thus gradually, by silent and stealthy influences, are great changes wrought. These little snow-particles, which the storm-spirit flings by handfuls through the air, will bury the great earth under their accumulated mass, nor permit her to behold her sister sky again for dreary months. We, likewise, shall lose sight of our mother's familiar visage, and must content ourselves with looking heavenward the oftener.

Now, leaving the storm to do his appointed office, let us sit down, pen in hand, by our fireside. Gloomy as it may seem, there is an influence productive of cheerfulness, and favorable to imaginative thought, in the atmosphere of a snowy day. The native of a southern clime may woo the muse beneath the heavy shade of summer foliage, reclining on banks of turf, while the sound of singing birds and warbling rivulets chimes in with the music of his soul. In our brief summer, I do not think, but only exist in the vague enjoyment of a dream. My hour of inspiration—if that hour ever comes—is when the green log hisses upon the hearth, and the bright flame, brighter for the gloom of the chamber, rustles high up the chimney, and the coals drop tinkling down among the growing heaps of ashes. When the casement rattles in the gust, and the snow-flakes or the sleety raindrops pelt hard against the window-panes, then I spread out my sheet of paper, with the certainty that thoughts and fancies will gleam forth upon it, like stars at twilight, or like violets in May,—perhaps to fade as soon. However transitory their glow, they at least shine amid the darksome shadow which the clouds of the outward sky fling through the room. Blessed, therefore, and reverently welcomed by me, her true-born son, be New England's winter, which makes us, one and all, the nurslings of the storm, and sings a familiar lullaby even in the wildest shriek of the December blast. Now look we forth again, and see how much of his task the storm-spirit has done.

Slow and sure! He has the day, perchance the week, before him, and may take his own time to accomplish Nature's burial in snow. A smooth mantle is scarcely yet thrown over the withered grass-plat, and the dry stalks of annuals still thrust themselves through the white surface in all parts of the garden. The leafless rose-bushes stand shivering in a shallow snow-drift, looking, poor things! as disconsolate as if they possessed a human consciousness of the dreary scene. This is a sad time for the shrubs that do not perish with the summer; they neither live nor die; what they retain of life seems but the chilling sense of death. Very sad are the flower shrubs in midwinter! The roofs of the houses are now all white, save where the eddying wind has kept them bare at the bleak corners. To discern the real intensity of the storm, we must fix upon some distant object,—as yonder spire,-and observe how the riotous gust fights with the descending snow throughout the intervening space. Sometimes the entire prospect is obscured; then, again, we have a distinct, but transient glimpse of the tall steeple, like a giant's ghost; and now the dense wreaths sweep between, as if demons were flinging snowdrifts at each other, in mid-air. Look next into the street, where we have seen an amusing parallel to the combat of those fancied demons in the upper regions. It is a snow-battle of school-boys. What a pretty satire on war and military glory might be written, in the form of a child's story, by describing the snowball-fights of two rival schools, the alternate defeats and victories of each, and the final triumph of one party, or perhaps of neither!...