History of Egypt, Chald?a, Syria, Babylonia, and Assyria, Volume 2 (of 12) 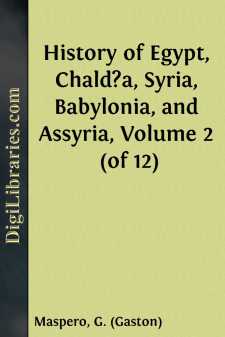 The king, the queen, and the royal princes—Administration under the Pharaohs—Feudalism and the Egyptian priesthood, the military—The citizens and country people.

Between the Fayûm and the apex of the Delta, the Lybian range expands and forms a vast and slightly undulating table-land, which runs parallel to the Nile for nearly thirty leagues. The Great Sphinx Harmakhis has mounted guard over its northern extremity ever since the time of the Followers of Horus.

Illustration: Drawn by Boudier, from La Description del'Egypte, A., vol. v. pl. 7. vignette, which is also byBoudier, represents a man bewailing the dead, in theattitude adopted at funerals by professional mourners ofboth sexes; the right fist resting on the ground, while theleft hand scatters on the hair the dust which he has justgathered up. The statue is in the Gîzeh Museum.

Hewn out of the solid rock at the extreme margin of the mountain-plateau, he seems to raise his head in order that he may be the first to behold across the valley the rising of his father the Sun. Only the general outline of the lion can now be traced in his weather-worn body. The lower portion of the head-dress has fallen, so that the neck appears too slender to support the weight of the head. The cannon-shot of the fanatical Mamelukes has injured both the nose and beard, and the red colouring which gave animation to his features has now almost entirely disappeared. But in spite of this, even in its decay, it still bears a commanding expression of strength and dignity. The eyes look into the far-off distance with an intensity of deep thought, the lips still smile, the whole face is pervaded with calmness and power. The art that could conceive and hew this gigantic statue out of the mountain-side, was an art in its maturity, master of itself and sure of its effects. How many centuries were needed to bring it to this degree of development and perfection!

Drawn by Faucher-Gudin, from a sketch by Lepsius. Thecornerstone at the top of the mastaba, at the extreme leftof the hieroglyphic frieze, had been loosened and thrown tothe ground by some explorer; the artist has restored it toits original position.

In later times, a chapel of alabaster and rose granite was erected alongside the god; temples were built here and there in the more accessible places, and round these were grouped the tombs of the whole country. The bodies of the common people, usually naked and uncoffined, were thrust under the sand, at a depth of barely three feet from the surface. Those of a better class rested in mean rectangular chambers, hastily built of yellow bricks, and roofed with pointed vaulting. No ornaments or treasures gladdened the deceased in his miserable resting-place; a few vessels, however, of coarse pottery contained the provisions left to nourish him during the period of his second existence.

Some of the wealthy class had their tombs cut out of the mountain-side; but the majority preferred an isolated tomb, a "mastaba,"* comprising a chapel above ground, a shaft, and some subterranean vaults.