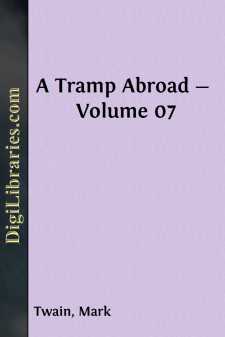 Everybody was out-of-doors; everybody was in the principal street of the village—not on the sidewalks, but all over the street; everybody was lounging, loafing, chatting, waiting, alert, expectant, interested—for it was train-time. That is to say, it was diligence-time—the half-dozen big diligences would soon be arriving from Geneva, and the village was interested, in many ways, in knowing how many people were coming and what sort of folk they might be. It was altogether the livest-looking street we had seen in any village on the continent.

The hotel was by the side of a booming torrent, whose music was loud and strong; we could not see this torrent, for it was dark, now, but one could locate it without a light. There was a large enclosed yard in front of the hotel, and this was filled with groups of villagers waiting to see the diligences arrive, or to hire themselves to excursionists for the morrow. A telescope stood in the yard, with its huge barrel canted up toward the lustrous evening star. The long porch of the hotel was populous with tourists, who sat in shawls and wraps under the vast overshadowing bulk of Mont Blanc, and gossiped or meditated.

Never did a mountain seem so close; its big sides seemed at one's very elbow, and its majestic dome, and the lofty cluster of slender minarets that were its neighbors, seemed to be almost over one's head. It was night in the streets, and the lamps were sparkling everywhere; the broad bases and shoulders of the mountains were in a deep gloom, but their summits swam in a strange rich glow which was really daylight, and yet had a mellow something about it which was very different from the hard white glare of the kind of daylight I was used to. Its radiance was strong and clear, but at the same time it was singularly soft, and spiritual, and benignant. No, it was not our harsh, aggressive, realistic daylight; it seemed properer to an enchanted land—or to heaven.

I had seen moonlight and daylight together before, but I had not seen daylight and black night elbow to elbow before. At least I had not seen the daylight resting upon an object sufficiently close at hand, before, to make the contrast startling and at war with nature.

The daylight passed away. Presently the moon rose up behind some of those sky-piercing fingers or pinnacles of bare rock of which I have spoken—they were a little to the left of the crest of Mont Blanc, and right over our heads—but she couldn't manage to climb high enough toward heaven to get entirely above them. She would show the glittering arch of her upper third, occasionally, and scrape it along behind the comblike row; sometimes a pinnacle stood straight up, like a statuette of ebony, against that glittering white shield, then seemed to glide out of it by its own volition and power, and become a dim specter, while the next pinnacle glided into its place and blotted the spotless disk with the black exclamation-point of its presence. The top of one pinnacle took the shapely, clean-cut form of a rabbit's head, in the inkiest silhouette, while it rested against the moon. The unillumined peaks and minarets, hovering vague and phantom-like above us while the others were painfully white and strong with snow and moonlight, made a peculiar effect.

But when the moon, having passed the line of pinnacles, was hidden behind the stupendous white swell of Mont Blanc, the masterpiece of the evening was flung on the canvas. A rich greenish radiance sprang into the sky from behind the mountain, and in this some airy shreds and ribbons of vapor floated about, and being flushed with that strange tint, went waving to and fro like pale green flames....