Young Knights of the Empire : Their Code, and Further Scout Yarns 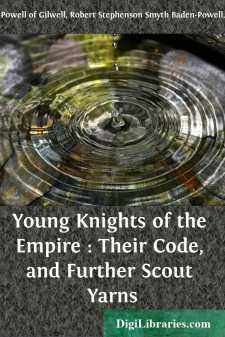 Perhaps you wonder what is a Young Knight of the Empire.

Well, you know what a knight is—or rather, used to be in the old days—a gallant fellow who was always ready to defend weaker people when they were being bullied; he was brave and honourable, and ready to risk his life in doing his duty according to the code or law of Chivalry.

Well, nowadays there are thousands of boys all over the British Empire carrying out the same idea, and making themselves into fine, reliable men, ready to take the place of those who have gone away to fight and who have fallen at the Front. These are the Boy Scouts. Their code is the Scout Law—that is, a set of ten rules which they carry out in their daily life.

I will explain these Laws, and will give you some other yarns of camp life and adventure such as the Scouts go in for.

Law 1. A SCOUT'S HONOUR IS TO BE TRUSTED.

If a Scout says "On my honour it is so," that means it is so, just as if he had taken a most solemn oath.

Similarly if a Scout officer says to a Scout, "I trust you on your honour to do this," the Scout is bound to carry out the order to the very best of his ability, and to let nothing interfere with his doing so.

If a Scout were to break his honour by telling a lie, or_ by not carrying out an order exactly when trusted on his honour to do so, he may be directed to hand over his Scout badge and never wear it again. He may also be directed to cease to be a Scout._

People of a civilised country, just like boys in a school, are bound to conduct themselves in a proper manner, because of the law which causes them to be punished if they misbehave. There is a code of laws drawn up for this purpose.

But there is another kind of law which binds people just as much as their written laws, though this one is neither written nor published.

This unwritten law is Honour.

A boy who has clambered over the school wall to go out of bounds and smoke secretly has committed an offence against the published law of the school. If next day the master asks in school, "Who has broken out of bounds?" the boy is not bound by the law to confess that he did; he can remain silent and thus escape punishment; but he is a poor-spirited creature if he does so, and has no sense of honour. If he is honourable he will manfully and honestly tell the master that he broke out and will stand whatever punishment comes of it. By so doing he will have proved to the master and to the other boys that he is manly and not afraid to tell the truth, and is to be relied upon because he puts his honour before all.

So the first training that the Boy Scout gets is to understand that Honour is his own private law which is guided by his conscience, and that once he is a Scout he must be guided in all his doings by his sense of Honour.

Law 2. A SCOUT IS LOYAL to the King, and to his officers, and to his parents, his Country, his employers, and to those under his orders. He must stick to them through thick and thin against anyone who is their enemy or who even talks badly of them....