Three Years in the Federal Cavalry 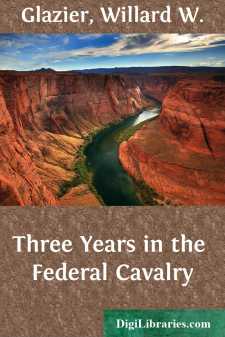 CHAPTER I. THE WAR FOR THE UNION.—CONTEST BEGUN.

The eleventh of April, 1861, revealed the real intention of the Southern people in their dastardly assault upon Fort Sumter. The thunder of Rebel cannon shook the air not only around Charleston, but sent its thrilling vibrations to the remotest sections of the country, and was the precursor of a storm whose wrath no one anticipated. This shock of arms was like a fire-alarm in our great cities, and the North arose in its might with a grand unanimity which the South did not expect. The spirit and principle of Rebellion were so uncaused and unprovoked, that scarcely could any one be found at home or abroad to justify them.

President Lincoln thereupon issued a call for seventy-five thousand men to uphold and vindicate the authority of the Government, and to prove, if possible, that secession was not only a heresy in doctrine, but an impracticability in the American Republic. The response to this call was much more general than the most sanguine had any reason to look for. The enthusiasm of the people was quite unbounded. Individuals encouraged individuals; families aroused families; communities vied with communities, and States strove with States. Who could be the first and do the most, was the noble contention which everywhere prevailed. All political party lines seemed to be obliterated. Under this renovating and inspiring spirit the work of raising the nucleus of the grandest army that ever swept a continent went bravely on. Regiments were rapidly organized and as rapidly as possible sent forward to the seat of Government; and so vast was the number that presented themselves for their country's defence, that the original call was soon more than filled, and the authorities found themselves unable to accept many organizations which were eager to press into the fray.

Meanwhile the great leaders of the Rebellion were marshalling the hordes of treason, and assembling them on the plains of Manassas, with the undoubted intention of moving upon the national capital. This point determined the principal theatre of the opening contest, and around it on every side, and particularly southward, was to be the aceldama of America,—the dreadful "field of blood."

The first great impulse of the authorities was in the direction of self-defence (and what could be more natural and proper?), and Washington was fortified and garrisoned. This done, it was believed that the accumulating forces of the Union, which had become thoroughly equipped and somewhat disciplined, ought to advance into the revolted territory, scatter the defiant hosts of the enemy, and put a speedy end to the slaveholders' Rebellion....