Three Months of My Life 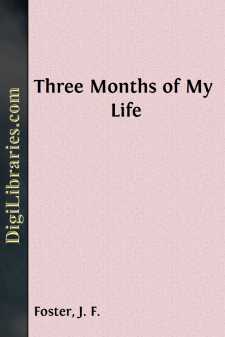 In the early morning of Midsummer's-day, 1868, I might have been seen slowly wending my way towards the office of the Deputy Inspector General of Hospitals, at Peshawur—for the purpose of appearing before the standing Medical Committee of the station, and having an enquiry made concerning the state of my health. A Dooley followed me lest my strength should prove inadequate to the task of walking a quarter of a mile. But let me make my description as short as the Committee did their enquiry. My face, as white as the clothes I wore, told more than my words could, and I was hardly required to recount how that one burning May-day I was called at noon to visit a sick woman, and that while all other Europeans were in their closed and darkened bungalows with punkahs swinging, and thermautidotes blowing cool breezes, I went forth alone on my medical mission to encounter the fierce gaze of the baneful sun, and was overpowered by its fiery influence, or how that I laid a weary month on the sick bed, tormented by day with a never ceasing headache, and by night with a terrible dread, worse than any pain, or to conclude, how the deadly climate of that notoriously evil station afforded me no prospect of improvement. This relation was scarcely needed to procure me a certificate, stating that three months leave of absence to Murree was absolutely essential for my recovery, and a recommendation that I might be allowed to proceed immediately in anticipation of the leave being granted. So the next evening saw me start from Peshawur for Rawul Pindee, in a Dâk Gharie, accompanied by my dog "Silly" and my Madrapee servant or "Boy." Onwards we sped at a gallop, the horses being changed every six miles, through Nowshera, the furnace; over the rapid and icy cold Indus by boat; past Fort Attock, the oven in which our soldiers are done to death; and Hussan Aboul of Lallah Rooke celebrity; arriving at the French Hotel at Pinder, ten miles from Peshawur the following morning. That day I called upon the Officers of the 6th Foot, with whom I had served in Jersey, and was persuaded to dine at mess. A melancholy dinner it was for me, meeting old friends whom I had not seen for so long. Yet not possessing energy enough for conversation or feeling the spirit of "Hail fellows, well met." I felt that my moody silence and ghostlike appearance (for I was dressed in black) threw a gloom over them. This was no doubt a morbid fancy as also was perhaps the idea that they looked at me with pitying eyes. But these feelings seized me, and increased till they became unbearable, and I was glad to escape to my Hotel.

"THREE MONTHS OF MY LIFE." A DIARY.

JULY 4th, 1868.—Started from Murree for Kashmir at 5.30 a.m. Bell, Surgeon 36th Regt. [Since deceased] came with me four miles. Walked on expecting the dandy to overtake me, but it did not, and I marched all the way, nine miles up a steep hill to Khaira Gullee, where I halted and put up in one of the old sheds formerly used by the working party when the road was being made. I am not tired, though my left heel is blistered, which is fair considering I have not walked half a mile for more than a month. The road is excellent and the scenery fine, the Khuds being sometimes deep, but nothing like the eastern Himalayas. The forest too is quite different, fir trees predominating here. Saw many beautiful birds, and regretted I had not brought my gun. In the evening a thunderstorm came on with a cold wind from the north, so I made a good fire with a few fir logs. In the middle of the night the storm became very violent, and large hailstones fell.

JULY 5th.—Got away at sunrise, the rain having quite cleared off, and marched on to Doonga Gullee, up a hill to an elevation of 9,000 feet, and then down again to about 7,000; then up a final steep to Doonga Gullee, 8,000 feet above the sea. The Khuds much grander very deep and precipitous, sometimes falling one or two thousand feet from the edge of the road almost perpendicularly. But the hills are too close together to allow the valleys to be termed magnificent. Reached Doonga Gullee at 10 a.m. The length of last march, eleven miles—the road, a good military one, has been cut in the face of the mountain. Put up at the Dâk Bungalow, and dined with the officers of the working party; among them Heath, of the 88th, and Leggatt and Lyons, of the 77th, whom I knew. A number of tents are pitched here for the working parties from the 19th and 77th Regiments (road making). I was carried part of the march in my dandy—a piece of carpet gathered at each end and hooked to a pole,—the pole being carried on the shoulders of two men. I swung below it just off the ground, and could often look down a vast depth between my knees. My first pickled tongue, cooked the day before yesterday was fly-blown at breakfast this morning. This may seem a trifling note, but it is ominous I fear for the whole of my salted stores.

JULY 6th.—Got up at 4 o'clock and marched on to Bugnoota, a distance of thirteen miles. The first four miles a slight rise, and then a rapid descent all the rest of the way. The road is much narrower, only a mule track in fact, I walked twelve miles, and then felt tired, and had a headache afterwards. Pitched my tent in a tope, (a grove of trees) in company with Dr. and Mrs. Holmes, of Rohat, whom I did not know. Slight rain in the middle of the day, but it cleared off towards evening. Felt all right after an hour's sleep and took a stroll before dinner. Scenery grand, tent pitched on the edge of a deep gorge at the bottom of which is a mountain stream, the hills rising abruptly on the opposite side....