The Young Castellan A Tale of the English Civil War 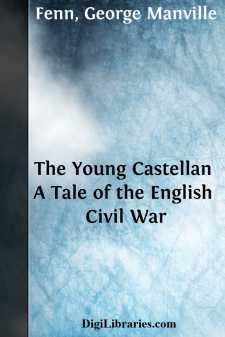 In the Old Armoury.

“I should be blind as poor old Jenkin if I couldn’t, Ben.”

“Ay, that you would, sir. Poor old Jenk, close upon ninety he be; and that’s another thing.”

“What do you mean?” said the boy addressed.

“What do I mean, sir? Why, I mean as that’s another thing as shows as old England’s wore out, and rustin’ and moulderin’ away.”

“Is this Dutch or English, Ben?” said the manly-looking boy, who had just arrived at the age when dark lads get teased about not having properly washed the sides of their faces and their upper lips, which begin to show traces of something “coming up.” “I don’t understand.”

“English, sir,” said the weather-beaten speaker, a decidedly ugly man of about sixty, grizzly of hair and beard, deeply-lined of countenance, and with a peculiar cicatrice extending from the upper part of his left cheek-bone diagonally down to the right corner of his lips, and making in its passage a deep notch across his nose. “English, sir; good old honest English.”

“You’re always grumbling, Ben, and you won’t get the rust off that morion with that.”

“That I shan’t, sir; and if I uses elber grease and sand, it’ll only come again. But it’s all a sign of poor old England rustin’ and moulderin’ away. The idea! And at a place like this. Old Jenk, as watch at the gate tower, and not got eyes enough to see across the moat, and even that’s getting full o’ mud!”

“Well, you wouldn’t have father turn the poor old man away because he’s blind and worn-out.”

“Not I, sir,” said the man, moistening a piece of flannel with oil, dipping it into some fine white sand, and then proceeding to scrub away at the rust spots upon the old helmet, which he now held between his knees; while several figures in armour, ranged down one side of the low, dark room in which the work was being carried on, seemed to be looking on and waiting to have their rust removed in turn.

“Then what do you mean?” said the boy.

“I mean, Master Roy, as it’s a pity to see the old towers going down hill as they are.”

“Not, sir? Well, if you’ll excuse me for saying as you’re wrong, I’ll say it. Where’s your garrison? where’s your horses? and where’s your guns, and powder, and shot, and stores?”

“Fudge, then! We don’t want any garrison nowadays, and as for horses, why, it was a sin to keep ’em in those old underground stables that used to be their lodging. Any one would think you expected to have some one come and lay siege to the place.”

“More unlikely things than that, Master Roy. We live in strange times, and the king may get the worst of it any day.”

“Oh, you old croaker!” cried Roy. “I believe you’d like to have a lot more men in the place, and mount guard, and go on drilling and practising with the big guns.”