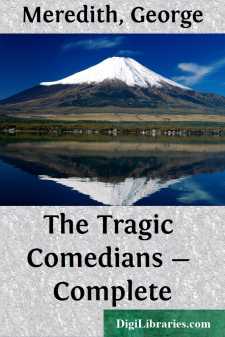 An unresisted lady-killer is probably less aware that he roams the pastures in pursuit of a coquette, than is the diligent Arachne that her web is for the devouring lion. At an early age Clotilde von Rudiger was dissatisfied with her conquests, though they were already numerous in her seventeenth year, for she began precociously, having at her dawn a lively fancy, a womanly person, and singular attractions of colour, eyes, and style. She belonged by birth to the small aristocracy of her native land. Nature had disposed her to coquettry, which is a pastime counting among the arts of fence, and often innocent, often serviceable, though sometimes dangerous, in the centres of polished barbarism known as aristocratic societies, where nature is not absent, but on the contrary very extravagant, tropical, by reason of her idle hours for the imbibing of copious draughts of sunlight. The young lady of charming countenance and sprightly manners is too much besought to choose for her choice to be decided; the numbers beseeching prevent her from choosing instantly, after the fashion of holiday schoolboys crowding a buffet of pastry. These are not coquettish, they clutch what is handy: and little so is the starved damsel of the sequestered village, whose one object of the worldly picturesque is the passing curate; her heart is his for a nod. But to be desired ardently of trooping hosts is an incentive to taste to try for yourself. Men (the jury of householders empanelled to deliver verdicts upon the ways of women) can almost understand that. And as it happens, tasting before you have sounded the sense of your taste will frequently mislead by a step or two difficult to retrieve: the young coquette must then be cruel, as necessarily we kick the waters to escape drowning: and she is not in all cases dealing with simple blocks or limp festoons, she comes upon veteran tricksters that have a knowledge of her sex, capable of outfencing her nascent individuality. The more imagination she has, for a source of strength in the future days, the more is she a prey to the enemy in her time of ignorance.

Clotilde's younger maiden hours and their love episodes are wrapped in the mists Diana considerately drops over her adventurous favourites. She was not under a French mother's rigid supervision. In France the mother resolves that her daughter shall be guarded from the risks of that unequal rencounter between foolish innocence and the predatory. Vigilant foresight is not so much practised where the world is less accurately comprehended. Young people of Clotilde's upper world everywhere, and the young women of it especially, are troubled by an idea drawn from what they inhale and guess at in the spirituous life surrounding them, that the servants of the devil are the valiant host, this world's elect, getting and deserving to get the best it can give in return for a little dashing audacity, a flavour of the Fronde in their conduct; they sin, but they have the world; and then they repent perhaps, but they have had the world....