The Railroad Question A historical and practical treatise on railroads, and remedies for their abuses 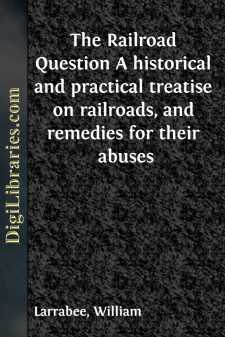 The people of the United States are engaged in the solution of the railroad problem. The main question to be determined is: Shall the railroads be owned and operated as public or as private property? Shall these great arteries of commerce be owned and controlled by a few persons for their own private use and gain, or shall they be made highways to be kept under strict government control and to be open for the use of all for a fixed, equal and reasonable compensation?

In a new and sparsely settled country which is rich in natural resources there may be no great danger in pursuing a laissez-faire policy in governmental affairs, but as the population of a commonwealth becomes denser, the quickened strife for property and the growing complexity of social and industrial interests make an extension of the functions of the state absolutely necessary to secure protection to property and freedom to the individual.

The American people have shown themselves capable of solving any political question yet presented to them, and the author has no doubt that with full information upon the subject they will find the proper solution of the railroad problem. The masses have an honest purpose and a keen sense of right and wrong. With them a question is not settled until it is settled right.

It must be conceded that of all the great inventions of modern times none has contributed as much to the prosperity and happiness of mankind as the railroad.

Our age is under lasting obligations to Watt and Stephenson and many other heroes of industry who have aided in bringing the railroad to its present state of perfection. Their genius is the product of our civilization, and their legacies should be shared by all the people to the greatest extent possible. An earnest desire to aid in attaining this end has prompted this contribution to the literature on the subject.

The author is not an entire novice in railroad affairs. He has had experience as a shipper and as a railroad promoter, owner and stockholder, and has even had thrust upon him for a short time the responsibility of a director, president and manager of a railroad company. He has, moreover, had every opportunity to familiarize himself with the various phases of the subject during his more than twenty years' connection with active legislation.

He came to the young State of Iowa before any railroad had reached the Mississippi. Engaging early in manufacturing, he suffered all the inconveniences of pioneer transportation, and his experience instilled into him liberal opinions concerning railroads and their promoters. He extended to them from the beginning all the assistance in his power, making not only private donations to new roads, but advocating also public aid upon the ground that railroads are public roads.

As a member of the Iowa Senate he introduced and fathered the bill for the act enabling townships, incorporated towns and cities to vote a five per cent. tax in aid of railroad construction. He favored always such legislation as would most encourage the building of railroads, believing that with an increase of competitive lines the common law and competition could be relied upon to correct abuses and solve the rate problem....