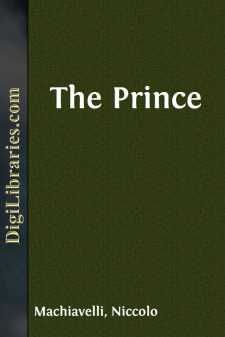 CHAPTER I — HOW MANY KINDS OF PRINCIPALITIES THERE ARE, AND BY WHAT MEANS THEY ARE ACQUIRED

All states, all powers, that have held and hold rule over men have been and are either republics or principalities.

Principalities are either hereditary, in which the family has been long established; or they are new.

The new are either entirely new, as was Milan to Francesco Sforza, or they are, as it were, members annexed to the hereditary state of the prince who has acquired them, as was the kingdom of Naples to that of the King of Spain.

Such dominions thus acquired are either accustomed to live under a prince, or to live in freedom; and are acquired either by the arms of the prince himself, or of others, or else by fortune or by ability.

I will leave out all discussion on republics, inasmuch as in another place I have written of them at length, and will address myself only to principalities. In doing so I will keep to the order indicated above, and discuss how such principalities are to be ruled and preserved.

I say at once there are fewer difficulties in holding hereditary states, and those long accustomed to the family of their prince, than new ones; for it is sufficient only not to transgress the customs of his ancestors, and to deal prudently with circumstances as they arise, for a prince of average powers to maintain himself in his state, unless he be deprived of it by some extraordinary and excessive force; and if he should be so deprived of it, whenever anything sinister happens to the usurper, he will regain it.

We have in Italy, for example, the Duke of Ferrara, who could not have withstood the attacks of the Venetians in '84, nor those of Pope Julius in '10, unless he had been long established in his dominions. For the hereditary prince has less cause and less necessity to offend; hence it happens that he will be more loved; and unless extraordinary vices cause him to be hated, it is reasonable to expect that his subjects will be naturally well disposed towards him; and in the antiquity and duration of his rule the memories and motives that make for change are lost, for one change always leaves the toothing for another.

But the difficulties occur in a new principality. And firstly, if it be not entirely new, but is, as it were, a member of a state which, taken collectively, may be called composite, the changes arise chiefly from an inherent difficulty which there is in all new principalities; for men change their rulers willingly, hoping to better themselves, and this hope induces them to take up arms against him who rules: wherein they are deceived, because they afterwards find by experience they have gone from bad to worse. This follows also on another natural and common necessity, which always causes a new prince to burden those who have submitted to him with his soldiery and with infinite other hardships which he must put upon his new acquisition.

In this way you have enemies in all those whom you have injured in seizing that principality, and you are not able to keep those friends who put you there because of your not being able to satisfy them in the way they expected, and you cannot take strong measures against them, feeling bound to them....