The Life of Reason 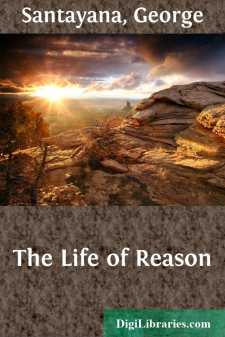 Whether Chaos or Order lay at the beginning of things is a question once much debated in the schools but afterward long in abeyance, not so much because it had been solved as because one party had been silenced by social pressure. The question is bound to recur in an age when observation and dialectic again freely confront each other. Naturalists look back to chaos since they observe everything growing from seeds and shifting its character in regeneration. The order now established in the world may be traced back to a situation in which it did not appear. Dialecticians, on the other hand, refute this presumption by urging that every collocation of things must have been preceded by another collocation in itself no less definite and precise; and further that some principle of transition or continuity must always have obtained, else successive states would stand in no relation to one another, notably not in the relation of cause and effect, expressed in a natural law, which is presupposed in this instance. Potentialities are dispositions, and a disposition involves an order, as does also the passage from any specific potentiality into act. Thus the world, we are told, must always have possessed a structure.

The two views may perhaps be reconciled if we take each with a qualification. Chaos doubtless has existed and will return—nay, it reigns now, very likely, in the remoter and inmost parts of the universe—if by chaos we understand a nature containing none of the objects we are wont to distinguish, a nature such that human life and human thought would be impossible in its bosom; but this nature must be presumed to have an order, an order directly importing, if the tendency of its movement be taken into account, all the complexities and beauties, all the sense and reason which exist now. Order is accordingly continual; but only when order means not a specific arrangement, favourable to a given form of life, but any arrangement whatsoever. The process by which an arrangement which is essentially unstable gradually shifts cannot be said to aim at every stage which at any moment it involves. For the process passes beyond. It presently abolishes all the forms which may have arrested attention and generated love; its initial energy defeats every purpose which we may fondly attribute to it. Nor is it here necessary to remind ourselves that to call results their own causes is always preposterous; for in this case even the mythical sense which might be attached to such language is inapplicable. Here the process, taken in the gross, does not, even by mechanical necessity, support the value which is supposed to guide it. That value is realised for a moment only; so that if we impute to Cronos any intent to beget his children we must also impute to him an intent to devour them.

Of course the various states of the world, when we survey them retrospectively, constitute another and now static order called historic truth. To this absolute and impotent order every detail is essential. If we wished to abuse language so much as to speak of will in an "Absolute" where change is excluded, so that nothing can be or be conceived beyond it, we might say that the Absolute willed everything that ever exists, and that the eternal order terminated in every fact indiscriminately; but such language involves an after-image of motion and life, of preparation, risk, and subsequent accomplishment, adventures all pre-supposing refractory materials and excluded from eternal truth by its very essence. The only function those traditional metaphors have is to shield confusion and sentimentality. Because Jehovah once fought for the Jews, we need not continue to say that the truth is solicitous about us, when it is only we that are fighting to attain it. The universe can wish particular things only in so far as particular beings wish them; only in its relative capacity can it find things good, and only in its relative capacity can it be good for anything.

The efficacious or physical order which exists at any moment in the world and out of which the next moment's order is developed, may accordingly be termed a relative chaos: a chaos, because the values suggested and supported by the second moment could not have belonged to the first; but merely a relative chaos, first because it probably carried values of its own which rendered it an order in a moral and eulogistic sense, and secondly because it was potentially, by virtue of its momentum, a basis for the second moment's values as well....