The Atomic Bombings of Hiroshima and Nagasaki 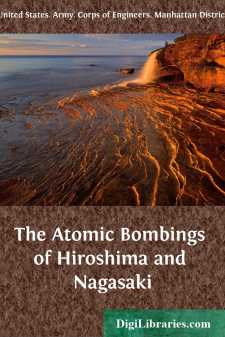 This report describes the effects of the atomic bombs which were dropped on the Japanese cities of Hiroshima and Nagasaki on August 6 and 9, 1945, respectively. It summarizes all the authentic information that is available on damage to structures, injuries to personnel, morale effect, etc., which can be released at this time without prejudicing the security of the United States.

This report has been compiled by the Manhattan Engineer District of theUnited States Army under the direction of Major General Leslie R.Groves. Special acknowledgement to those whose work contributedlargely to this report is made to:

The Joint Atomic Bomb Investigating Group (Medical). and particularly to the following individuals:

Dr. R. Serber, for his comments on flash burn,

Dr. Hans Bethe, Cornell University, for his information of the nature of atomic explosions,

Majors Noland Varley and Walter C. Youngs, Corps of Engineers, UnitedStates Army, for their evaluation of physical damage to structures,

Statement by the President of the United States: "Sixteen hours ago an American airplane dropped one bomb on Hiroshima, Japan, and destroyed its usefulness to the enemy. That bomb had more power than 20,000 tons of T.N.T. It had more than two thousand times the blast power of the British Grand Slam, which is the largest bomb ever yet used in the history of warfare".

These fateful words of the President on August 6th, 1945, marked the first public announcement of the greatest scientific achievement in history. The atomic bomb, first tested in New Mexico on July 16, 1945, had just been used against a military target.

On August 6th, 1945, at 8:15 A.M., Japanese time, a B-29 heavy bomber flying at high altitude dropped the first atomic bomb on Hiroshima. More than 4 square miles of the city were instantly and completely devastated. 66,000 people were killed, and 69,000 injured.

On August 10, the day after the atomic bombing of Nagasaki, the Japanese government requested that it be permitted to surrender under the terms of the Potsdam declaration of July 26th which it had previously ignored.

On August 11th, 1945, two days after the bombing of Nagasaki, a message was dispatched from Major General Leslie R....