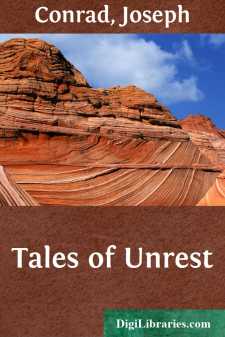 KARAIN, A MEMORY I

We knew him in those unprotected days when we were content to hold in our hands our lives and our property. None of us, I believe, has any property now, and I hear that many, negligently, have lost their lives; but I am sure that the few who survive are not yet so dim-eyed as to miss in the befogged respectability of their newspapers the intelligence of various native risings in the Eastern Archipelago. Sunshine gleams between the lines of those short paragraphs—sunshine and the glitter of the sea. A strange name wakes up memories; the printed words scent the smoky atmosphere of to-day faintly, with the subtle and penetrating perfume as of land breezes breathing through the starlight of bygone nights; a signal fire gleams like a jewel on the high brow of a sombre cliff; great trees, the advanced sentries of immense forests, stand watchful and still over sleeping stretches of open water; a line of white surf thunders on an empty beach, the shallow water foams on the reefs; and green islets scattered through the calm of noonday lie upon the level of a polished sea, like a handful of emeralds on a buckler of steel.

There are faces too—faces dark, truculent, and smiling; the frank audacious faces of men barefooted, well armed and noiseless. They thronged the narrow length of our schooner's decks with their ornamented and barbarous crowd, with the variegated colours of checkered sarongs, red turbans, white jackets, embroideries; with the gleam of scabbards, gold rings, charms, armlets, lance blades, and jewelled handles of their weapons. They had an independent bearing, resolute eyes, a restrained manner; and we seem yet to hear their soft voices speaking of battles, travels, and escapes; boasting with composure, joking quietly; sometimes in well-bred murmurs extolling their own valour, our generosity; or celebrating with loyal enthusiasm the virtues of their ruler. We remember the faces, the eyes, the voices, we see again the gleam of silk and metal; the murmuring stir of that crowd, brilliant, festive, and martial; and we seem to feel the touch of friendly brown hands that, after one short grasp, return to rest on a chased hilt. They were Karain's people—a devoted following. Their movements hung on his lips; they read their thoughts in his eyes; he murmured to them nonchalantly of life and death, and they accepted his words humbly, like gifts of fate. They were all free men, and when speaking to him said, "Your slave." On his passage voices died out as though he had walked guarded by silence; awed whispers followed him. They called him their war-chief. He was the ruler of three villages on a narrow plain; the master of an insignificant foothold on the earth—of a conquered foothold that, shaped like a young moon, lay ignored between the hills and the sea.

From the deck of our schooner, anchored in the middle of the bay, he indicated by a theatrical sweep of his arm along the jagged outline of the hills the whole of his domain; and the ample movement seemed to drive back its limits, augmenting it suddenly into something so immense and vague that for a moment it appeared to be bounded only by the sky....