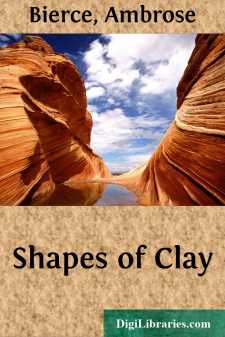 THE PASSING SHOW. I.

I know not if it was a dream. I viewed  A city where the restless multitude,    Between the eastern and the western deep  Had roared gigantic fabrics, strong and rude.

Colossal palaces crowned every height;  Towers from valleys climbed into the light;    O'er dwellings at their feet, great golden domes  Hung in the blue, barbarically bright.

But now, new-glimmering to-east, the day  Touched the black masses with a grace of gray,    Dim spires of temples to the nation's God  Studding high spaces of the wide survey.

Well did the roofs their solemn secret keep  Of life and death stayed by the truce of sleep,    Yet whispered of an hour-when sleepers wake,  The fool to hope afresh, the wise to weep.

The gardens greened upon the builded hills  Above the tethered thunders of the mills    With sleeping wheels unstirred to service yet  By the tamed torrents and the quickened rills.

A hewn acclivity, reprieved a space,  Looked on the builder's blocks about his base    And bared his wounded breast in sign to say:  "Strike! 't is my destiny to lodge your race.

"'T was but a breath ago the mammoth browsed  Upon my slopes, and in my caves I housed    Your shaggy fathers in their nakedness,  While on their foeman's offal they caroused."

Ships from afar afforested the bay.  Within their huge and chambered bodies lay    The wealth of continents; and merrily sailed  The hardy argosies to far Cathay.

Beside the city of the living spread—  Strange fellowship!—the city of the dead;    And much I wondered what its humble folk,  To see how bravely they were housed, had said.

Noting how firm their habitations stood,  Broad-based and free of perishable wood—    How deep in granite and how high in brass  The names were wrought of eminent and good,

I said: "When gold or power is their aim,  The smile of beauty or the wage of shame,    Men dwell in cities; to this place they fare  When they would conquer an abiding fame."

From the red East the sun—a solemn rite—  Crowned with a flame the cross upon a height    Above the dead; and then with all his strength  Struck the great city all aroar with light!

I know not if it was a dream. I came  Unto a land where something seemed the same    That I had known as 't were but yesterday,  But what it was I could not rightly name.

It was a strange and melancholy land.  Silent and desolate. On either hand    Lay waters of a sea that seemed as dead,  And dead above it seemed the hills to stand,

Grayed all with age, those lonely hills—ah me,  How worn and weary they appeared to be!    Between their feet long dusty fissures clove  The plain in aimless windings to the sea.

One hill there was which, parted from the rest,  Stood where the eastern water curved a-west.    Silent and passionless it stood....