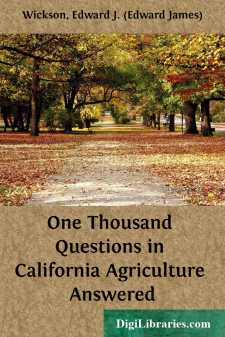 Depth of Soil for Fruit.

Would four feet of good loose soil be enough for lemons?

Four feet of good soil, providing the underlying strata are not charged with alkali, would give you a good growth of lemon trees if moisture was regularly present in about the right quantity, neither too much nor too little, and the temperature conditions were favorable to the success of this tree, which will not stand as much frost as the orange.

What is the lowest temperature at which grapefruit and lemons will succeed?

The grapefruit tree is about as hardy as the orange; the lemon is much more tender. The fruit of citrus trees will be injured by temperature at the ordinary freezing point if continued for some little time, and the tree itself is likely to be injured by a temperature of 25 or 27° if continued for a few hours. The matter of duration of a low temperature is perhaps quite as important as the degree which is actually reached by the thermometer. The condition of the tree as to being dormant or active also affects injury by freezing temperatures. Under certain conditions an orange tree may survive a temperature of 15° Fahrenheit.

I wish to bud from certain trees that nurseries probably do not carry, as they came from a seedling. Is there more than one variety of myrobalan used, and if so, is one as good as another? If I take sprouts that come up where the roots have been cut, will they make good trees? I have tried a few, now three years old, and the trees are doing nicely so far, but the roots sprout up where cut. I am informed that if I can raise them from slips they will not sprout up from the root. Will apricots and peaches grafted or budded on myrobalan produce fruit as large as they will if grafted on their own stock?

Experience seems to be clear that from sprouts you will get sprouts. We prefer rooted cuttings to sprouts, but even these are abandoned for seedling roots of the common deciduous fruits and of citrus fruits also. The apricot does well enough on the myrobalan if the soil needs that root; they are usually larger on the peach root or on apricot seedlings. The peach is no longer worked on the myrobalan in this State. One seedling of the cherry plum is about as good a myrobalan as another.

What Will the Sucker Be?

I have a Japanese plum tree which bears choice plums. Three years ago a strong young shoot came up from the root of it, which I dug out and planted. Will it make a bearing tree in time and be of like quality with the parent?

It will certainly bear something when it gets ready. Whether it will be like the parent tree depends upon the wood from which the sucker broke out. If the young tree was budded very low, or if it was planted low, or if the ground has been shifted so as to bring the wood above the bud in a place to root a sucker, the fruit will be that of the parent tree. If the shoot came from the root below the bud, you will get a duplication of whatever stock the plum was budded on in the nursery....