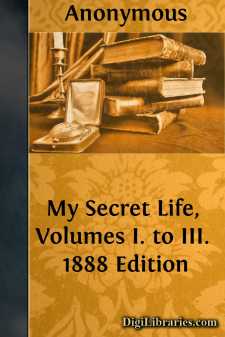 I began these memoirs when about twenty-five years old, having from youth kept a diary of some sort, which perhaps from habit made me think of recording my inner and secret life.

When I began it, I had scarcely read a baudy book, none of which excepting "Fanny Hill" appeared to me to be truthful, that did, and it does so still; the others telling of recherche eroticisms, or of inordinate copulative powers, of the strange twists, tricks, and fancies, of matured voluptuousness, and philosophical lewedness, seemed to my comparative ignorance, as baudy imaginings, or lying inventions, not worthy of belief; although I now know by experience, that they may be true enough, however eccentric, and improbable, they may appear to the uninitiated.

Fanny Hill was a woman's experience. Written perhaps by a woman, where was a man's, written with equal truth? That book has no baudy word in it; but baudy acts need the baudy ejaculations; the erotic, full flavored expressions, which even the chastest indulge in, when lust, or love, is in its full tide of performance. So I determined to write my private life freely as to fact, and in the spirit of the lustful acts done by me, or witnessed; it is written therefore with absolute truth, and without any regard whatever for what the world calls decency. Decency and voluptuousness in its fullest acceptance, cannot exist together, one would kill the other; the poetry of copulation I have only experienced with a few women, which however neither prevented them, nor me from calling a spade, a spade.

I began it for my amusement; when many years had been chronicled I tired of it and ceased. Some ten years afterwards I met a woman, with whom, or with those she helped me do; I did, said, saw, and heard, well nigh everything a man and woman could do with their genitals, and began to narrate those events, when quite fresh in my memory, a great variety of incidents extending over four years or more. Then I lost sight of her, and my amorous amusements for a while were simpler, but that part of my history was complete.

After a little while, I set to work to describe the events of the intervening years of my youth, and early middle age; which included most of my gallant intrigues and adventures of a frisky order; but not the more lascivious ones of later years. Then an illness caused me to think seriously of burning the whole. But not liking to destroy my labor, I laid it aside again for a couple of years. Then another illness gave me long uninterrupted leisure; I read my manuscript, and filled in some occurrences which I had forgotten, but which my diary enabled me to place in their proper order. This will account for the difference in style in places, which I now observe; and a very needless repetition, of voluptuous descriptions, which I had forgotten, had been before described; that however is inevitable, for human copulation, vary the incidents leading up to it as you may, is, and must be, at all times, much the same affair.

Then for the first time, I thought I would print my work that had been commenced more than twenty years before, but hesitated....