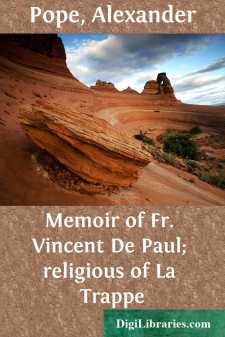 The reply of Maximilian to the wealthy courtier who tendered him a goodly purse of gold for a title of nobility, was worthy of that emperor: "I can enrich thee," he said, "but only thy own virtue can enoble thee" All true grandeur, excellence, and dignity, are the offspring of virtue. Even the most renowned oracles of paganism proclaim this, and the very persecutors of holiness are often constrained to pay homage to their victim. No wonder, then, that whenever we are privileged to find one of those rare mortals, whom virtue has unmistakably marked as her own, we lovingly attach an exceptional importance to everything connected with his history. Such assuredly was he whose "account of what befel" him during his first ten years in America, is now for the first time published in English. A brief sketch of the religious Order to which he belonged, of the life he led, and of the Monastery he founded, may give added interest to his own simple and edifying narrative.

What Scripture terms "the world," and so emphatically denounces as such, is the poisonous source of the mother-evils described by St. John as "the concupiscence of the flesh, and the concupiscence of the eyes, and the pride of life." Flight from the contamination of this threefold inordinate love of pleasures, riches and honors, being essential to salvation, is most easily, most surely and most meritoriously achieved by those who, in answer to a Divine call, consecrate and give themselves wholly to God, by the practice of the evangelical counsels of chastity, poverty and obedience. Those who embrace this angelic profession form the choice portion of the fold of Christ. They rank as His spouses, and, by the holy ambition of their virgin love, console Him for the craven defections or the cold indifference of so many Christians.

All Christians animated by the spirit of Jesus are religious, just as they are holy, and kings and priests (I Peter 2,9). Such is the unity of the marvellous body of Christ, the Church, whose soul is infinite love, that her every member shares, in some sense and measure, all her sublime prerogatives. But as God willed that in His family some goods should be common to all, so He likewise decreed that other goods should be reserved to comparatively few, and through these chosen and privileged ones benefit the rest. Hence, as besides this elementary royalty and priesthood conferred by baptism, there are, according to the express order of God superior and official royalties and priesthoods, in like manner besides the fundamental religion, which is the vital breath of every soul in a state of grace, there is a religion more eminent, more definite, more perfect. Thus as there is here below a sacerdotal and royal state, so likewise is there a religious state which is confined to those only who bind themselves by vows to a monastic life. It is evident, therefore, that when Catholics use the expression "religious Order," or term a monk or nun "a religious," they are perfectly justified in doing so, the cavillings of Dr. Trench to the contrary notwithstanding.

Each religious order is characterized by the special purpose for which it was founded, and by the constitution and rule which its members are to follow. The observance of the Benedictine rule was greatly relaxed in the monasteries of France towards the close of the eleventh century, when St. Robert (1098) inaugurated a reform at Citeaux, which resulted in the establishment of the Cistercian Order. A monastery of this Order was subsequently (1140) founded in La Perche, France, by the Count of Perche, and was called La Trappe. In 1662 the commendatory abbot of La Trappe, Armand Jean le Bouthilier de Rance', a nobleman who abandoned wealth and a brilliant career, visited La Trappe, undertook a new reform of the Cistercian rule, and thus became the founder of that branch of this Order which became known as the congregation of La Trappe. In consequence of the Revolution of 1789, one of the Trappist Fathers, Dom Augustin conducted twenty-four of his brethren from France to Valsainte, in Switzerland....