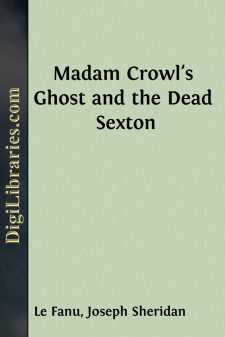 Twenty years have passed since you last saw Mrs. Jolliffe's tall slim figure. She is now past seventy, and can't have many mile-stones more to count on the journey that will bring her to her long home. The hair has grown white as snow, that is parted under her cap, over her shrewd, but kindly face. But her figure is still straight, and her step light and active.

She has taken of late years to the care of adult invalids, having surrendered to younger hands the little people who inhabit cradles, and crawl on all-fours. Those who remember that good-natured face among the earliest that emerge from the darkness of non-entity, and who owe to their first lessons in the accomplishment of walking, and a delighted appreciation of their first babblings and earliest teeth, have "spired up" into tall lads and lasses, now. Some of them shew streaks of white by this time, in brown locks, "the bonny gouden" hair, that she was so proud to brush and shew to admiring mothers, who are seen no more on the green of Golden Friars, and whose names are traced now on the flat grey stones in the church-yard.

So the time is ripening some, and searing others; and the saddening and tender sunset hour has come; and it is evening with the kind old north-country dame, who nursed pretty Laura Mildmay, who now stepping into the room, smiles so gladly, and throws her arms round the old woman's neck, and kisses her twice.

"Now, this is so lucky!" said Mrs. Jenner, "you have just come in time to hear a story."

"Na, na, od wite it! no story, ouer true for that, I sid it a wi my aan eyen. But the barn here, would not like, at these hours, just goin' to her bed, to hear tell of freets and boggarts."

"Ghosts? The very thing of all others I should most likely to hear of."

"She was just going to tell me all about her first engagement to attend a dying old woman," says Mrs. Jenner, "and of the ghost she saw there. Now, Mrs. Jolliffe, make your tea first, and then begin."

The good woman obeyed, and having prepared a cup of that companionable nectar, she sipped a little, drew her brows slightly together to collect her thoughts, and then looked up with a wondrous solemn face to begin.

Good Mrs. Jenner, and the pretty girl, each gazed with eyes of solemn expectation in the face of the old woman, who seemed to gather awe from the recollections she was summoning.

The old room was a good scene for such a narrative, with the oak-wainscoting, quaint, and clumsy furniture, the heavy beams that crossed its ceiling, and the tall four-post bed, with dark curtains, within which you might imagine what shadows you please.

Mrs. Jolliffe cleared her voice, rolled her eyes slowly round, and began her tale in these words:—

"I'm an ald woman now, and I was but thirteen, my last birthday, the night I came to Applewale House. My aunt was the housekeeper there, and a sort o' one-horse carriage was down at Lexhoe waitin' to take me and my box up to Applewale....