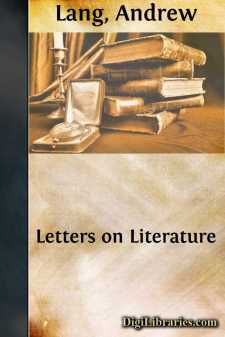 Dear Wincott,—You write to me, from your “bright home in the setting sun,” with the flattering information that you have read my poor “Letters to Dead Authors.”  You are kind enough to say that you wish I would write some “Letters to Living Authors;” but that, I fear, is out of the question,—for me.

A thoughtful critic in the Spectator has already remarked that the great men of the past would not care for my shadowy epistles—if they could read them.  Possibly not; but, like Prior, “I may write till they can spell”—an exercise of which ghosts are probably as incapable as was Matt’s little Mistress of Quality.  But Living Authors are very different people, and it would be perilous, as well as impertinent, to direct one’s comments on them literally, in the French phrase, “to their address.”  Yet there is no reason why a critic should not adopt the epistolary form.

Our old English essays, the papers in the Tatler and Spectator, were originally nothing but letters.  The vehicle permits a touch of personal taste, perhaps of personal prejudice.  So I shall write my “Letters on Literature,” of the present and of the past, English, American, ancient, or modern, to you, in your distant Kansas, or to such other correspondents as are kind enough to read these notes.

Poetry has always the precedence in these discussions.  Poor Poetry!  She is an ancient maiden of good family, and is led out first at banquets, though many would prefer to sit next some livelier and younger Muse, the lady of fiction, or even the chattering soubrette of journalism.  Seniores priores: Poetry, if no longer very popular, is a dame of the worthiest lineage, and can boast a long train of gallant admirers, dead and gone.  She has been much in courts.  The old Greek tyrants loved her; great Rhamses seated her at his right hand; every prince had his singers.  Now we dwell in an age of democracy, and Poetry wins but a feigned respect, more out of courtesy, and for old friendship’s sake, than for liking.  Though so many write verse, as in Juvenal’s time, I doubt if many read it.  “None but minstrels list of sonneting.”  The purchasing public, for poetry, must now consist chiefly of poets, and they are usually poor.

Can anything speak more clearly of the decadence of the art than the birth of so many poetical “societies”?  We have the Browning Society, the Shelley Society, the Shakespeare Society, the Wordsworth Society—lately dead.  They all demonstrate that people have not the courage to study verse in solitude, and for their proper pleasure; men and women need confederates in this adventure.  There is safety in numbers, and, by dint of tea-parties, recitations, discussions, quarrels and the like, Dr. Furnivall and his friends keep blowing the faint embers on the altar of Apollo.  They cannot raise a flame!

In England we are in the odd position of having several undeniable poets, and very little new poetry worthy of the name.  The chief singers have outlived, if not their genius, at all events its flowering time.  Hard it is to estimate poetry, so apt we are, by our very nature, to prefer “the newest songs,” as Odysseus says men did even during the war of Troy.  Or, following another ancient example, we say, like the rich niggards who neglected Theocritus, “Homer is enough for all.”

Let us attempt to get rid of every bias, and, thinking as dispassionately as we can, we still seem to read the name of Tennyson in the golden book of English poetry.  I cannot think that he will ever fall to a lower place, or be among those whom only curious students pore over, like Gower, Drayton, Donne, and the rest.  Lovers of poetry will always read him as they will read Wordsworth, Keats, Milton, Coleridge, and Chaucer.  Look his defects in the face, throw them into the balance, and how they disappear before his merits!  He is the last and youngest of the mighty race, born, as it were, out of due time, late, and into a feebler generation....