Jonas on a Farm in Winter 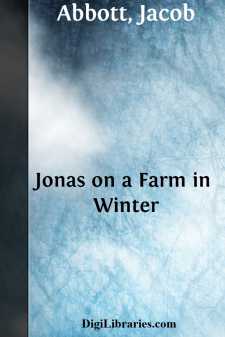 Early one winter morning, while Jonas was living upon the farm, in the employment of Oliver's father, he came groping down, just before daylight, into the great room.

The great room was, as its name indicated, quite large, occupying a considerable portion of the lower floor of the farmer's house. There was a very spacious fireplace in one side, with a settle, which was a long seat, with a very high back, near it. The room was used both for kitchen and parlor, and there was a great variety of furniture in different parts of it. There were chairs and tables, a bookcase with a desk below, a loom in one corner by a window, and a spinning-wheel near it. Then, there were a great many doors. One led out into the back yard, one up stairs, one into a back room,—which was used for coarse work, and which was generally called the kitchen,—and one into a large store closet adjoining the great room.

Jonas groped his way down stairs; but as soon as he opened the great room door, he found the room filled with a flickering light, which came from the fireplace. There was a log there, which had been buried in the ashes the night before. It had burned slowly, through the night, and the fire had broken out at one end, which now glowed like a furnace, and illuminated the whole room with a faint red light.

Jonas went up towards the fire. The hearth was very large, and formed of great, flat stones. On one side of it was a large heap of wood, which Jonas had prepared the night before, to be ready for his fire. On the other side was a black cat asleep, with her chin upon her paws. When the cat heard Jonas coming, she rose up, stretched out her fore paws, and then began to purr, rubbing her cheeks against the bottom of the settle.

The cat's name was Darco.

Jonas took a pair of heavy iron tongs, which stood by the side of the fire, and pulled forward the log. He found that it had burned through, and by three or four strokes with the tongs, he broke it up into large fragments of coal, of a dark-reddish color. The air being thus admitted, they soon began to brighten and crackle, until, in a few minutes, there was before him a large heap of glowing and burning coals. He put a log on behind, then placed the andirons up to the log, and a great forestick upon the andirons. He placed the forestick so far out as to leave a considerable space between it and the backlog, and then he put the coals up into this space,—having first put in a slender stick, resting upon the andirons, to keep the coals from falling through. He then placed on a great deal more wood, and he soon had a roaring fire, which crackled loud, and blazed up into the chimney.

"Now for my lantern," said Jonas.

So saying, he took down a lantern, which hung by the side of the fire. The lantern was made of tin, with holes punched through it on all sides, so as to allow the light to shine through; and yet the holes were not large enough to admit the wind, to blow out the light....