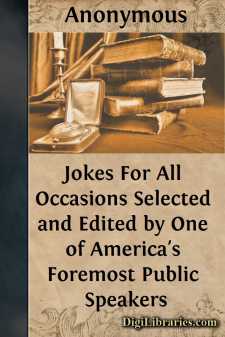 The ways of telling a story are as many as the tellers themselves. It is impossible to lay down precise rules by which any one may perfect himself in the art, but it is possible to offer suggestions by which to guide practise in narration toward a gratifying success.

Broadly distinguished, there are two methods of telling a story. One uses the extreme of brevity, and makes its chief reliance on the point. The other devotes itself in great part to preliminary elaboration in the narrative, making this as amusing as possible, so that the point itself serves to cap a climax. In the public telling of an anecdote the tyro would be well advised to follow the first method. That is, he should put his reliance on the point of the story, and on this alone. He should scrupulously limit himself to such statements as are absolutely essential to clear understanding of the point. He should make a careful examination of the story with two objects in mind: the first, to determine just what is required in the way of explanation; the second, an exact understanding of the point itself. Then, when it comes to the relating of the story, he must simply give the information required by the hearers in order to appreciate the point. As to the point itself, he must guard against any carelessness. Omission of an essential detail is fatal. It may be well for him, at the outset, to memorize the conclusion of the story. No matter how falteringly the story is told, it will succeed if the point itself be made clear, and this is insured for even the most embarrassed speaker by memorizing it.

The art of making the whole narration entertaining and amusing is to be attained only by intelligent practise. It is commonly believed that story-sellers are born, not made. As a matter of fact, however, the skilled raconteurs owe their skill in great measure to the fact that they are unwearying in practise. It is, therefore, recommended to any one having ambition in this direction that he cultivate his ability by exercising it. He should practise short and simple stories according to his opportunities, with the object of making the narration smooth and easy. An audience of one or two familiar friends is sufficient in the earlier efforts. Afterward, the practise may be extended before a larger number of listeners on social occasions. When facility has been attained in the simplest form, attempts to extend the preliminary narrative should be made. The preparation should include an effort to invest the characters of the story; or its setting, with qualities amusing in themselves, quite apart from any relation to the point. Precise instruction cannot be given, but concentration along this line will of itself develop the humorous perception of the story-teller, so that, though the task may appear too difficult in prospect, it will not prove so in actual experience. But, in every instance, care must be exercised to keep the point of the story clearly in view, and to omit nothing essential in the preparation for it.

In the selection of stories to be retailed, it is the part of wisdom to choose the old, rather than the new. This is because the new story, so called, travels with frightful velocity under modern social conditions, and, in any particular case, the latest story, when told by you to a friend, has just been heard by him from some other victim of it. But the memory of most persons for stories is very short. Practically never does it last for years. So, it is uniformly safe to present as novelties at the present day the humor of past decades. Moreover, the exercise of some slight degree of ingenuity will serve to give those touches in the way of change by which the story may be brought up to date. Indeed, by such adaptation, the story is made really one's own—as the professional humorists thankfully admit!

Wit and humor, and the distinction between them, defy precise definition. Luckily, they need none. To one asking what is beauty, a wit replied: "That is the question of a blind man." Similarly, none requires a definition of wit and humor unless he himself be lacking in all appreciation of them, and, if he be so lacking, no amount of explanation will avail to give him understanding. Borrow, in one of his sermons, declared concerning wit: "It is, indeed, a thing so versatile, multiform, appearing in so many shapes and garbs, so variously apprehended of several eyes and judgments, that it seemeth no less hard to settle a clear and certain notion thereof than to make a portrait of Proteus, or to define the figure of the fleeting wind." Nor is it fitting to attempt exact distinctions between wit and humor, which are essentially two aspects of one thing....