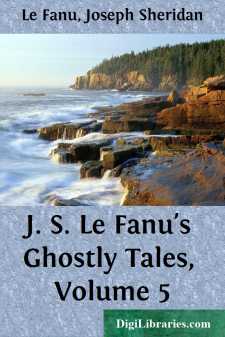 In the five Northumbrian counties you will scarcely find so bleak, ugly, and yet, in a savage way, so picturesque a moor as Dardale Moss. The moor itself spreads north, south, east, and west, a great undulating sea of black peat and heath.

What we may term its shores are wooded wildly with birch, hazel, and dwarf-oak. No towering mountains surround it, but here and there you have a rocky knoll rising among the trees, and many a wooded promontory of the same pretty, because utterly wild, forest, running out into its dark level.

Habitations are thinly scattered in this barren territory, and a full mile away from the meanest was the stone cottage of Mother Carke.

Let not my southern reader who associates ideas of comfort with the term "cottage" mistake. This thing is built of shingle, with low walls. Its thatch is hollow; the peat-smoke curls stingily from its stunted chimney. It is worthy of its savage surroundings.

The primitive neighbours remark that no rowan-tree grows near, nor holly, nor bracken, and no horseshoe is nailed on the door.

Not far from the birches and hazels that straggle about the rude wall of the little enclosure, on the contrary, they say, you may discover the broom and the rag-wort, in which witches mysteriously delight. But this is perhaps a scandal.

Mall Carke was for many a year the sage femme of this wild domain. She has renounced practice, however, for some years; and now, under the rose, she dabbles, it is thought, in the black art, in which she has always been secretly skilled, tells fortunes, practises charms, and in popular esteem is little better than a witch.

Mother Carke has been away to the town of Willarden, to sell knit stockings, and is returning to her rude dwelling by Dardale Moss. To her right, as far away as the eye can reach, the moor stretches. The narrow track she has followed here tops a gentle upland, and at her left a sort of jungle of dwarf-oak and brushwood approaches its edge. The sun is sinking blood-red in the west. His disk has touched the broad black level of the moor, and his parting beams glare athwart the gaunt figure of the old beldame, as she strides homeward stick in hand, and bring into relief the folds of her mantle, which gleam like the draperies of a bronze image in the light of a fire. For a few moments this light floods the air—tree, gorse, rock, and bracken glare; and then it is out, and gray twilight over everything.

All is still and sombre. At this hour the simple traffic of the thinly-peopled country is over, and nothing can be more solitary.

From this jungle, nevertheless, through which the mists of evening are already creeping, she sees a gigantic man approaching her.

In that poor and primitive country robbery is a crime unknown. She, therefore, has no fears for her pound of tea, and pint of gin, and sixteen shillings in silver which she is bringing home in her pocket. But there is something that would have frighted another woman about this man.

He is gaunt, sombre, bony, dirty, and dressed in a black suit which a beggar would hardly care to pick out of the dust....