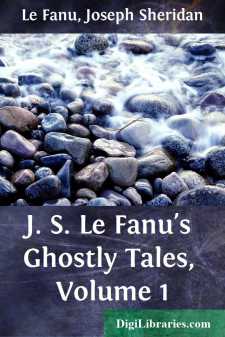 "For he is not a man as I am that we should come together; neither is there any that might lay his hand upon us both. Let him, therefore, take his rod away from me, and let not his fear terrify me."

There exists, at this moment, in good preservation a remarkable work of Schalken's. The curious management of its lights constitutes, as usual in his pieces, the chief apparent merit of the picture. I say apparent, for in its subject, and not in its handling, however exquisite, consists its real value. The picture represents the interior of what might be a chamber in some antique religious building; and its foreground is occupied by a female figure, in a species of white robe, part of which is arranged so as to form a veil. The dress, however, is not that of any religious order. In her hand the figure bears a lamp, by which alone her figure and face are illuminated; and her features wear such an arch smile, as well becomes a pretty woman when practising some prankish roguery; in the background, and, excepting where the dim red light of an expiring fire serves to define the form, in total shadow, stands the figure of a man dressed in the old Flemish fashion, in an attitude of alarm, his hand being placed upon the hilt of his sword, which he appears to be in the act of drawing.

There are some pictures, which impress one, I know not how, with a conviction that they represent not the mere ideal shapes and combinations which have floated through the imagination of the artist, but scenes, faces, and situations which have actually existed. There is in that strange picture, something that stamps it as the representation of a reality.

And such in truth it is, for it faithfully records a remarkable and mysterious occurrence, and perpetuates, in the face of the female figure, which occupies the most prominent place in the design, an accurate portrait of Rose Velderkaust, the niece of Gerard Douw, the first, and, I believe, the only love of Godfrey Schalken. My great grandfather knew the painter well; and from Schalken himself he learned the fearful story of the painting, and from him too he ultimately received the picture itself as a bequest. The story and the picture have become heir-looms in my family, and having described the latter, I shall, if you please, attempt to relate the tradition which has descended with the canvas.

There are few forms on which the mantle of romance hangs more ungracefully than upon that of the uncouth Schalken—the boorish but most cunning worker in oils, whose pieces delight the critics of our day almost as much as his manners disgusted the refined of his own; and yet this man, so rude, so dogged, so slovenly, in the midst of his celebrity, had in his obscure, but happier days, played the hero in a wild romance of mystery and passion.

When Schalken studied under the immortal Gerard Douw, he was a very young man; and in spite of his phlegmatic temperament, he at once fell over head and ears in love with the beautiful niece of his wealthy master....