How to Fail in Literature; a lecture 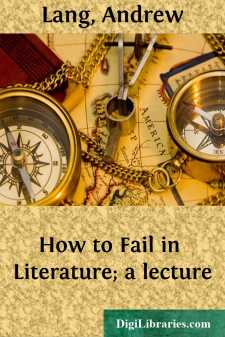 HOW TO FAIL IN LITERATURE

What should be a man’s or a woman’s reason for taking literature as a vocation, what sort of success ought they to desire, what sort of ambition should possess them?  These are natural questions, now that so many readers exist in the world, all asking for something new, now that so many writers are making their pens “in running to devour the way” over so many acres of foolscap.  The legitimate reasons for enlisting (too often without receiving the shilling) in this army of writers are not far to seek.  A man may be convinced that he has useful, or beautiful, or entertaining ideas within him, he may hold that he can express them in fresh and charming language.  He may, in short, have a “vocation,” or feel conscious of a vocation, which is not exactly the same thing.  There are “many thyrsus bearers, few mystics,” many are called, few chosen.  Still, to be sensible of a vocation is something, nay, is much, for most of us drift without any particular aim or predominant purpose.  Nobody can justly censure people whose chief interest is in letters, whose chief pleasure is in study or composition, who rejoice in a fine sentence as others do in a well modelled limb, or a delicately touched landscape, nobody can censure them for trying their fortunes in literature.  Most of them will fail, for, as the bookseller’s young man told an author once, they have the poetic temperament, without the poetic power.  Still among these whom Pendennis has tempted, in boyhood, to run away from school to literature as Marryat has tempted others to run away to sea, there must be some who will succeed.  But an early and intense ambition is not everything, any more than a capacity for taking pains is everything in literature or in any art.

Some have the gift, the natural incommunicable power, without the ambition, others have the ambition but no other gift from any Muse.  This class is the more numerous, but the smallest class of all has both the power and the will to excel in letters.  The desire to write, the love of letters may shew itself in childhood, in boyhood, or youth, and mean nothing at all, a mere harvest of barren blossom without fragrance or fruit.  Or, again, the concern about letters may come suddenly, when a youth that cared for none of those things is waning, it may come when a man suddenly finds that he has something which he really must tell.  Then he probably fumbles about for a style, and his first fresh impulses are more or less marred by his inexperience of an art which beguiles and fascinates others even in their school-days.

It is impossible to prophesy the success of a man of letters from his early promise, his early tastes; as impossible as it is to predict, from her childish grace, the beauty of a woman.

But the following remarks on How to fail in Literature are certainly meant to discourage nobody who loves books, and has an impulse to tell a story, or to try a song or a sermon.  Discouragements enough exist in the pursuit of this, as of all arts, crafts, and professions, without my adding to them.  Famine and Fear crouch by the portals of literature as they crouch at the gates of the Virgilian Hades.  There is no more frequent cause of failure than doubt and dread; a beginner can scarcely put his heart and strength into a work when he knows how long are the odds against his victory, how difficult it is for a new man to win a hearing, even though all editors and publishers are ever pining for a new man.  The young fellow, unknown and unwelcomed, who can sit down and give all his best of knowledge, observation, humour, care, and fancy to a considerable work has got courage in no common portion; he deserves to triumph, and certainly should not be disheartened by our old experience.  But there be few beginners of this mark, most begin so feebly because they begin so fearfully.  They are already too discouraged, and can scarce do themselves justice.  It is easier to write more or less well and agreeably when you are certain of being published and paid, at least, than to write well when a dozen rejected manuscripts are cowering (as Theocritus says) in your chest, bowing their pale faces over their chilly knees, outcast, hungry, repulsed from many a door.  To write excellently, brightly, powerfully, with these poor unwelcomed wanderers, returned MSS., in your possession, is difficult indeed.  It might be wiser to do as M....