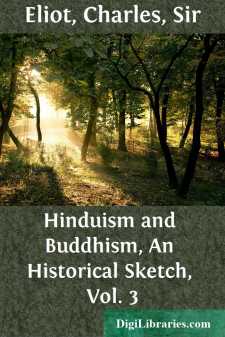 Add to My Favorites
Published: 9 years ago
Downloads: 231
Rating: (0 Votes)

The subject of this Book is the expansion of Indian influence throughout Eastern Asia and the neighbouring islands. That influence is clear and wide-spread, nay almost universal, and it is with justice that we speak of Further India and the Dutch call their colonies Neerlands Indië. For some early chapters in the story of this expansion the dates and details are meagre, but on the whole the investigator's chief difficulty is to grasp and marshal the mass of facts relating to the development of religion and civilization in this great region.

The spread of Hindu thought was an intellectual conquest, not an exchange of ideas. On the north-western frontier there was some reciprocity, but otherwise the part played by India was consistently active and not receptive. The Far East counted for nothing in her internal history, doubtless because China was too distant and the other countries had no special culture of their own. Still it is remarkable that whereas many Hindu missionaries preached Buddhism in China, the idea of making Confucianism known in India seems never to have entered the head of any Chinese.

It is correct to say that the sphere of India's intellectual conquests was the East and North, not the West, but still Buddhism spread considerably to the west of its original home and entered Persia. Stein discovered a Buddhist monastery in "the terminal marshes of the Helmund" in Seistan and Bamian is a good distance from our frontier. But in Persia and its border lands there were powerful state religions, first Zoroastrianism and then Islam, which disliked and hindered the importation of foreign creeds and though we may see some resemblance between Sufis and Vedantists, it does not appear that the Moslim civilization of Iran owed much to Hinduism.

But in all Asia north and east of India, excluding most of Siberia but including the Malay Archipelago, Indian influence is obvious. Though primarily connected with religion it includes much more, such as architecture, painting and other arts, an Indian alphabet, a vocabulary of Indian words borrowed or translated, legends and customs. The whole life of such diverse countries as Tibet, Burma, and Java would have been different had they had no connection with India.

In these and many other regions the Hindus must have found a low state of civilization, but in the Far East they encountered a culture comparable with their own. There was no question of colonizing or civilizing rude races. India and China met as equals, not hostile but also not congenial, a priest and a statesman, and the statesman made large concessions to the priest. Buddhism produced a great fermentation and controversy in Chinese thought, but though its fortunes varied it hardly ever became as in Burma and Ceylon the national religion. It was, as a Chinese Emperor once said, one of the two wings of a bird. The Chinese characters did not give way to an Indian alphabet nor did the Confucian Classics fall into desuetude. The subjects of Chinese and Japanese pictures may be Buddhist, the plan and ornaments of their temples Indian, yet judged as works of art the pictures and temples are indigenous. But for all that one has only to compare the China of the Hans with the China of the T'angs to see how great was the change wrought by India.

This outgrowing of Indian influence, so long continued and so wide in extent, was naturally not the result of any one impulse. At no time can we see in India any passion of discovery, any fever of conquest such as possessed Europe when the New World and the route to the East round the Cape were discovered. India's expansion was slow, generally peaceful and attracted little attention at home. Partly it was due to the natural permeation and infiltration of a superior culture beyond its own borders, but it is equally natural that this gradual process should have been sometimes accelerated by force of arms. The Hindus produced no Tamerlanes or Babers, but a series of expeditions, spread over long ages, but still not few in number, carried them to such distant goals as Ceylon, Java and Camboja.

But the diffusion of Indian influence, especially in China, was also due to another agency, namely religious propaganda and the deliberate despatch of missions. These missions seem to have been exclusively Buddhist for wherever we find records of Hinduism outside India, for instance in Java and Camboja, the presence of Hindu conquerors or colonists is also recorded. Hinduism accompanied Hindus and sometimes spread round their settlements, but it never attempted to convert distant and alien lands....