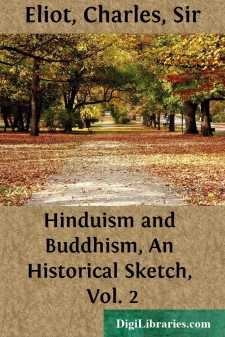 Add to My Favorites
Published: 8 years ago
Downloads: 59
Rating: (0 Votes)

The obscurest period in the history of Buddhism is that which follows the reign of Asoka, but the enquirer cannot grope for long in these dark ages without stumbling upon the word Mahayana. This is the name given to a movement which in its various phases may be regarded as a philosophical school, a sect and a church, and though it is not always easy to define its relationship to other schools and sects it certainly became a prominent aspe ct of Buddhism in India about the beginning of our era besides achieving enduring triumphs in the Far East. The word signifies Great Vehicle or Carriage, that is a means of conveyance to salvation, and is contrasted with Hinayana, the Little Vehicle, a name bestowed on the more conservative party though not willingly accepted by them. The simplest description of the two Vehicles is that given by the Chinese traveller I-Ching (635-713 A.D.) who saw them both as living realities in India. He says "Those who worship Bodhisattvas and read Mahayana Sutras are called Mahayanists, while those who do not do this are called Hinayanists." In other words, the Mahayanists have scriptures of their own, not included in the Hinayanist Canon and adore superhuman beings in the stage of existence immediately below Buddhahood and practically differing little from Indian deities. Many characteristics could be added to I-Ching's description but they might not prove universally true of the Mahayana nor entirely absent from the Hinayana, for however divergent the two Vehicles may have become when separated geographically, for instance in Ceylon and Japan, it is clear that when they were in contact, as in India and China, the distinction was not always sharp. But in general the Mahayana was more popular, not in the sense of being simpler, for parts of its teaching were exceedingly abstruse, but in the sense of striving to invent or include doctrines agreeable to the masses. It was less monastic than the older Buddhism, and more emotional; warmer in charity, more personal in devotion, more ornate in art, literature and ritual, more disposed to evolution and development, whereas the Hinayana was conservative and rigid, secluded in its cloisters and open to the plausible if unjust accusation of selfishness. The two sections are sometimes described as northern and southern Buddhism, but except as a rough description of their distribution at the present day, this distinction is not accurate, for the Mahayana penetrated to Java, while the Hinayana reached Central Asia and China. But it is true that the development of the Mahayana was due to influences prevalent in northern India and not equally prevalent in the South. The terms Pali and Sanskrit Buddhism are convenient and as accurate as can be expected of any nomenclature covering so large a field.

Though European writers usually talk of two Yânas or Vehicles—the great and the little—and though this is clearly the important distinction for historical purposes, yet Indian and Chinese Buddhists frequently enumerate three. These are the Г…ЕЎrâvakayâna, the vehicle of the ordinary Bhikshu who hopes to become an Arhat, the Pratyekabuddhayâna for the rare beings who are able to become Buddhas but do not preach the law to others, and in contrast to both of these the Mahayana or vehicle of Buddhas and Bodhisattvas. As a rule these three Vehicles are not regarded as hostile or even incompatible. Thus the Lotus sutra, maintains that there is really but one vehicle though by a wise concession to human weakness the Buddha lets it appear that there are three to suit divers tastes....