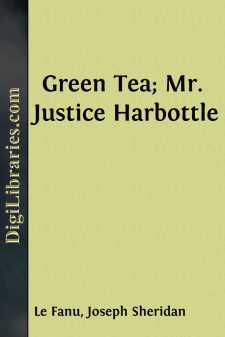 Dr. Hesselius Relates How He Met the Rev. Mr. Jennings

The Rev. Mr. Jennings is tall and thin. He is middle-aged, and dresses with a natty, old-fashioned, high-church precision. He is naturally a little stately, but not at all stiff. His features, without being handsome, are well formed, and their expression extremely kind, but also shy.

I met him one evening at Lady Mary Heyduke's. The modesty and benevolence of his countenance are extremely prepossessing.

We were but a small party, and he joined agreeably enough in the conversation, He seems to enjoy listening very much more than contributing to the talk; but what he says is always to the purpose and well said. He is a great favourite of Lady Mary's, who it seems, consults him upon many things, and thinks him the most happy and blessed person on earth. Little knows she about him.

The Rev. Mr. Jennings is a bachelor, and has, they say sixty thousand pounds in the funds. He is a charitable man. He is most anxious to be actively employed in his sacred profession, and yet though always tolerably well elsewhere, when he goes down to his vicarage in Warwickshire, to engage in the actual duties of his sacred calling, his health soon fails him, and in a very strange way. So says Lady Mary.

There is no doubt that Mr. Jennings' health does break down in, generally, a sudden and mysterious way, sometimes in the very act of officiating in his old and pretty church at Kenlis. It may be his heart, it may be his brain. But so it has happened three or four times, or oftener, that after proceeding a certain way in the service, he has on a sudden stopped short, and after a silence, apparently quite unable to resume, he has fallen into solitary, inaudible prayer, his hands and his eyes uplifted, and then pale as death, and in the agitation of a strange shame and horror, descended trembling, and got into the vestry-room, leaving his congregation, without explanation, to themselves. This occurred when his curate was absent. When he goes down to Kenlis now, he always takes care to provide a clergyman to share his duty, and to supply his place on the instant should he become thus suddenly incapacitated.

When Mr. Jennings breaks down quite, and beats a retreat from the vicarage, and returns to London, where, in a dark street off Piccadilly, he inhabits a very narrow house, Lady Mary says that he is always perfectly well. I have my own opinion about that. There are degrees of course. We shall see.

Mr. Jennings is a perfectly gentlemanlike man. People, however, remark something odd. There is an impression a little ambiguous. One thing which certainly contributes to it, people I think don't remember; or, perhaps, distinctly remark. But I did, almost immediately. Mr. Jennings has a way of looking sidelong upon the carpet, as if his eye followed the movements of something there. This, of course, is not always. It occurs now and then. But often enough to give a certain oddity, as I have said, to his manner, and in this glance travelling along the floor there is something both shy and anxious....