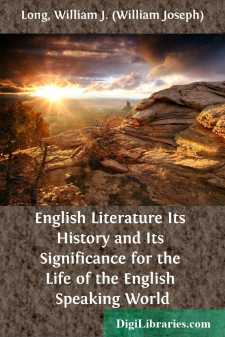 The Shell and the Book. A child and a man were one day walking on the seashore when the child found a little shell and held it to his ear. Suddenly he heard sounds,--strange, low, melodious sounds, as if the shell were remembering and repeating to itself the murmurs of its ocean home. The child's face filled with wonder as he listened. Here in the little shell, apparently, was a voice from another world, and he listened with delight to its mystery and music. Then came the man, explaining that the child heard nothing strange; that the pearly curves of the shell simply caught a multitude of sounds too faint for human ears, and filled the glimmering hollows with the murmur of innumerable echoes. It was not a new world, but only the unnoticed harmony of the old that had aroused the child's wonder.

Some such experience as this awaits us when we begin the study of literature, which has always two aspects, one of simple enjoyment and appreciation, the other of analysis and exact description. Let a little song appeal to the ear, or a noble book to the heart, and for the moment, at least, we discover a new world, a world so different from our own that it seems a place of dreams and magic. To enter and enjoy this new world, to love good books for their own sake, is the chief thing; to analyze and explain them is a less joyous but still an important matter. Behind every book is a man; behind the man is the race; and behind the race are the natural and social environments whose influence is unconsciously reflected. These also we must know, if the book is to speak its whole message. In a word, we have now reached a point where we wish to understand as well as to enjoy literature; and the first step, since exact definition is impossible, is to determine some of its essential qualities.

ArtisticQualities of Literature. The first significant thing is the essentially artistic quality of all literature. All art is the expression of life in forms of truth and beauty; or rather, it is the reflection of some truth and beauty which are in the world, but which remain unnoticed until brought to our attention by some sensitive human soul, just as the delicate curves of the shell reflect sounds and harmonies too faint to be otherwise noticed. A hundred men may pass a hayfield and see only the sweaty toil and the windrows of dried grass; but here is one who pauses by a Roumanian meadow, where girls are making hay and singing as they work. He looks deeper, sees truth and beauty where we see only dead grass, and he reflects what he sees in a little poem in which the hay tells its own story:

Yesterday's flowers am I,And I have drunk my last sweet draught of dew.Young maidens came and sang me to my death;The moon looks down and sees me in my shroud,    The shroud of my last dew....
Show more
Show less