Dickens' Stories About Children Every Child Can Read 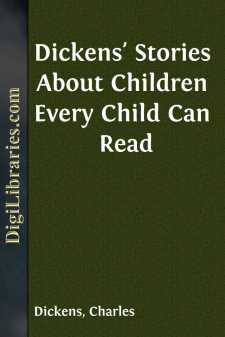 TROTTY VECK AND HIS DAUGHTER MEG. "TROTTY" seems a strange name for an old man, but it was given to Toby Veck because of his always going at a trot to do his errands; for he was a ticket porter or messenger and his office was to take letters and messages for people who were in too great a hurry to send them by post, which in those days was neither so cheap nor so quick as it is now. He did not earn very much, and had to be out in all weathers and all day long. But Toby was of a cheerful disposition, and looked on the bright side of everything, and was grateful for any small mercies that came in his way; and so was happier than many people who never knew what it is to be hungry or in want of comforts. His greatest joy was his dear, bright, pretty daughter Meg, who loved him dearly.

One cold day, near the end of the year, Toby had been waiting a long time for a job, trotting up and down in his usual place before the church, and trying hard to keep himself warm, when the bells chimed twelve o'clock, which made Toby think of dinner.

"Why, father, father," said a pleasant voice, and Toby turned to find his daughter's sweet, bright eyes close to his.

"Why, pet," said he, kissing her and squeezing her blooming face between his hands, "what's to-do? I didn't expect you to-day, Meg."

"Neither did I expect to come, father," said Meg, nodding and smiling. "But here I am! And not alone, not alone!"

"Why you don't mean to say," observed Trotty, looking curiously at the covered basket she carried, "that you——"

Trotty was going to lift up the cover at once, in a great hurry, when she gaily interposed her hand.

"No, no, no," said Meg, with the glee of a child. "Lengthen it out a little. Let me just lift up the corner; just a lit-tle, ti-ny cor-ner, you know," said Meg, suiting the action to the word with the utmost gentleness, and speaking very softly, as if she were afraid of being overheard by something inside the basket. "There, now; what's that?"

Toby took the shortest possible sniff at the edge of the basket, and cried out in rapture:

But to Meg's great delight he could not guess what it was that smelt so good.

"Polonies? Trotters? Liver? Pigs' feet? Sausages?" he tried one after the other. At last he exclaimed in triumph. "Why, what am I a-thinking of? It's tripe."

"And so," said Meg, "I'll lay the cloth at once, father; for I have brought the tripe in a basin, and tied the basin up in a pocket-handkerchief; and if I like to be proud for once, and spread that for a cloth, and call it a cloth, there's nobody to prevent me, is there father?"

"Not that I know of, my dear," said Toby; "but they're always a-bringing up some new law or other."

"And according to what I was reading you in the paper the other day, father, what the judge said, you know, we poor people are supposed to know them all....