Critical Miscellanies (Vol 3 of 3) The Life of George Eliot 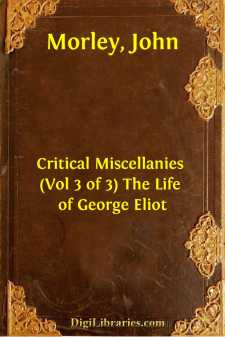 THE LIFE OF GEORGE ELIOT.

The illustrious woman who is the subject of these volumes makes a remark to her publisher which is at least as relevant now as it was then. Can nothing be done, she asks, by dispassionate criticism towards the reform of our national habits in the matter of literary biography? 'Is it anything short of odious that as soon as a man is dead his desk should be raked, and every insignificant memorandum which he never meant for the public be printed for the gossiping amusement of people too idle to reread his books?' Autobiography, she says, at least saves a man or a woman that the world is curious about, from the publication of a string of mistakes called Memoirs. Even to autobiography, however, she confesses her deep repugnance unless it can be written so as to involve neither self-glorification nor impeachment of others—a condition, by the way, with which hardly any, save Mill's, can be said to comply. 'I like,' she proceeds, 'that He being dead yet speaketh should have quite another meaning than that' (iii. 226, 297, 307). She shows the same fastidious apprehension still more clearly in another way. 'I have destroyed almost all my friends' letters to me,' she says, 'because they were only intended for my eyes, and could only fall into the hands of persons who knew little of the writers if I allowed them to remain till after my death. In proportion as I love every form of piety—which is venerating love—I hate hard curiosity; and, unhappily, my experience has impressed me with the sense that hard curiosity is the more common temper of mind' (ii. 286). There is probably little difference among us in respect of such experience as that.

Much biography, perhaps we might say most, is hardly above the level of that 'personal talk,' to which Wordsworth sagely preferred long barren silence, the flapping of the flame of his cottage fire, and the under-song of the kettle on the hob. It would not, then, have much surprised us if George Eliot had insisted that her works should remain the only commemoration of her life. There be some who think that those who have enriched the world with great thoughts and fine creations, might best be content to rest unmarked 'where heaves the turf in many a mouldering heap,' leaving as little work to the literary executor, except of the purely crematory sort, as did Aristotle, Plato, Shakespeare, and some others whose names the world will not willingly let die. But this is a stoic's doctrine; the objector may easily retort that if it had been sternly acted on, we should have known very very little about Dr. Johnson, and nothing about Socrates.

This is but an ungracious prelude to some remarks upon a book, which must be pronounced a striking success. There will be very little dispute as to the fact that the editor of these memorials of George Eliot has done his work with excellent taste, judgment, and sense. He found no autobiography nor fragment of one, but he has skilfully shaped a kind of autobiography by a plan which, so far as we know, he is justified in calling new, and which leaves her life to write itself in extracts from her letters and journals....