Camp-Fire and Cotton-Field Southern Adventure in Time of War. Life with the Union Armies, and Residence on a Louisiana Plantation 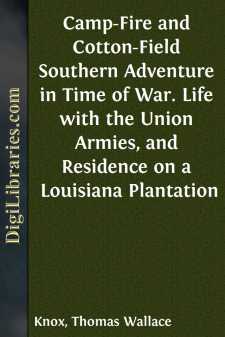 I passed the summer and autumn of 1860 in the Rocky Mountain Gold Region. At that time the population of the young Territory was composed of emigrants from Northern and Southern States, those from the colder regions being in the majority. When the Presidential election took place, there was much angry discussion of the great questions of the day, and there were threats of violence on the part of the friends of the "institution." The residents of the Gold Region were unable to cast their votes for the men of their choice, but their anxiety to know the result was very great.

When it was announced that the Republican candidate had triumphed, there were speedy signs of discontent. Some of the more impulsive Southerners departed at once for their native States, predicting a separation of Dixie from the North before the end of the year. Some went to New Mexico, and others to Texas, while many remained to press their favorite theories upon their neighbors. The friends of the Union were slow to believe that any serious difficulty would take place. Long after the secession of South Carolina they were confident our differences could be healed without an appeal to arms.

My visit to the Rocky Mountains was a professional one. During my stay in that region I supplied several Eastern journals with letters from Colorado and New Mexico. One after another, the editors of these journals informed me that letters from the Territories had lost their interest, owing to the troubles growing out of the election. Wishing to take part in the drama about to be enacted, I essayed a midwinter journey across the plains, and, early in February, stood in the editorial room of The Herald.

I announced my readiness to proceed to any point between the Poles, wherever The Herald desired a correspondent. The editor-in-chief was busy over a long letter from some point in the South, but his response was promptly given. Half reading, half pausing over the letter, he briefly said:--

"A long and bloody war is upon us, in which the whole country will be engaged. We shall desire you to take the field; probably in the West. It may be several weeks before we need you, but the war cannot be long delayed."

At that time few persons in the North looked upon the situation with any fears of trouble. There were some who thought a hostile collision was among the possibilities, but these persons were generally in the minority. Many believed the secession movement was only the hasty work of political leaders, that would be soon undone when the people of the South came to their senses.

That the South would deliberately plunge the country into civil war was difficult to comprehend, even after the first steps had been taken....