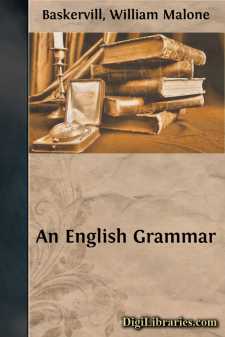 So many slighting remarks have been made of late on the use of teaching grammar as compared with teaching science, that it is plain the fact has been lost sight of that grammar is itself a science. The object we have, or should have, in teaching science, is not to fill a child's mind with a vast number of facts that may or may not prove useful to him hereafter, but to draw out and exercise his powers of observation, and to show him how to make use of what he observes.... And here the teacher of grammar has a great advantage over the teacher of other sciences, in that the facts he has to call attention to lie ready at hand for every pupil to observe without the use of apparatus of any kind while the use of them also lies within the personal experience of every one.—Dr Richard Morris.

The proper study of a language is an intellectual discipline of the highest order. If I except discussions on the comparative merits of Popery and Protestantism, English grammar was the most important discipline of my boyhood.—John Tyndall.

What various opinions writers on English grammar have given in answer to the question, What is grammar? may be shown by the following—

English grammar is a description of the usages of the English language by good speakers and writers of the present day.—Whitney

A description of account of the nature, build, constitution, or make of a language is called its grammar—Meiklejohn

Grammar teaches the laws of language, and the right method of using it in speaking and writing.—Patterson

The English word grammar relates only to the laws which govern the significant forms of words, and the construction of the sentence.—Richard Grant White

These are sufficient to suggest several distinct notions about English grammar—

Synopsis of the above.

(1) It makes rules to tell us how to use words.

(2) It is a record of usage which we ought to follow.

(3) It is concerned with the forms of the language.

(4) English has no grammar in the sense of forms, or inflections, but takes account merely of the nature and the uses of words in sentences.

The older idea and its origin.

Fierce discussions have raged over these opinions, and numerous works have been written to uphold the theories. The first of them remained popular for a very long time. It originated from the etymology of the word grammar (Greek gramma, writing, a letter), and from an effort to build up a treatise on English grammar by using classical grammar as a model.

Perhaps a combination of (1) and (3) has been still more popular, though there has been vastly more classification than there are forms.

During recent years, (2) and (4) have been gaining ground, but they have had hard work to displace the older and more popular theories. It is insisted by many that the student's time should be used in studying general literature, and thus learning the fluent and correct use of his mother tongue. It is also insisted that the study and discussion of forms and inflections is an inexcusable imitation of classical treatises.

Which view shall the student of English accept? Before this is answered, we should decide whether some one of the above theories must be taken as the right one, and the rest disregarded.

The material of grammar.

The province of English grammar is, rightly considered, wider than is indicated by any one of the above definitions; and the student ought to have a clear idea of the ground to be covered.

It must be admitted that the language has very few inflections at present, as compared with Latin or Greek; so that a small grammar will hold them all.

It is also evident, to those who have studied the language historically, that it is very hazardous to make rules in grammar: what is at present regarded as correct may not be so twenty years from now, even if our rules are founded on the keenest scrutiny of the "standard" writers of our time....