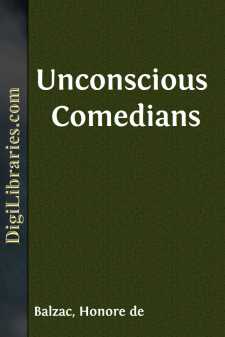 Leon de Lora, our celebrated landscape painter, belongs to one of the noblest families of the Roussillon (Spanish originally) which, although distinguished for the antiquity of its race, has been doomed for a century to the proverbial poverty of hidalgos. Coming, light-footed, to Paris from the department of the Eastern Pyrenees, with the sum of eleven francs in his pocket for all viaticum, he had in some degree forgotten the miseries and privations of his childhood and his family amid the other privations and miseries which are never lacking to "rapins," whose whole fortune consists of intrepid vocation. Later, the cares of fame and those of success were other causes of forgetfulness.

If you have followed the capricious and meandering course of these studies, perhaps you will remember Mistigris, Schinner's pupil, one of the heroes of "A Start in Life" (Scenes from Private Life), and his brief apparitions in other Scenes. In 1845, this landscape painter, emulator of the Hobbemas, Ruysdaels, and Lorraines, resembles no more the shabby, frisky rapin whom we then knew. Now an illustrious man, he owns a charming house in the rue de Berlin, not far from the hotel de Brambourg, where his friend Brideau lives, and quite close to the house of Schinner, his early master. He is a member of the Institute and an officer of the Legion of honor; he is thirty-six years old, has an income of twenty thousand francs from the Funds, his pictures sell for their weight in gold, and (what seems to him more extraordinary than the invitations he receives occasionally to court balls) his name and fame, mentioned so often for the last sixteen years by the press of Europe, has at last penetrated to the valley of the Eastern Pyrenees, where vegetate three veritable Loras: his father, his eldest brother, and an old paternal aunt, Mademoiselle Urraca y Lora.

In the maternal line the painter has no relation left except a cousin, the nephew of his mother, residing in a small manufacturing town in the department. This cousin was the first to bethink himself of Leon. But it was not until 1840 that Leon de Lora received a letter from Monsieur Sylvestre Palafox-Castal-Gazonal (called simply Gazonal) to which he replied that he was assuredly himself,—that is to say, the son of the late Leonie Gazonal, wife of Comte Fernand Didas y Lora.

During the summer of 1841 cousin Sylvestre Gazonal went to inform the illustrious unknown family of Lora that their little Leon had not gone to the Rio de la Plata, as they supposed, but was now one of the greatest geniuses of the French school of painting; a fact the family did not believe. The eldest son, Don Juan de Lora assured his cousin Gazonal that he was certainly the dupe of some Parisian wag.

Now the said Gazonal was intending to go to Paris to prosecute a lawsuit which the prefect of the Eastern Pyrenees had arbitrarily removed from the usual jurisdiction, transferring it to that of the Council of State. The worthy provincial determined to investigate this act, and to ask his Parisian cousin the reason of such high-handed measures....