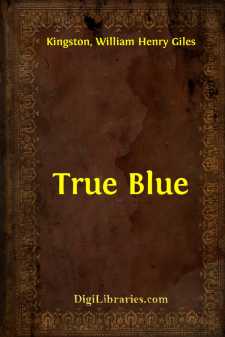 Chapter One. True Blue—A British Seaman of the Old School.

The old Terrible, 74, was ploughing her way across the waters of the Atlantic, now rolling and leaping, dark and angry, with white-crested seas which dashed against her bows and flew in masses of foam over her decks. She was under her three topsails, closely reefed; but even thus her tall masts bent, and twisted, and writhed, as if striving to leap out of her, while every timber and bulkhead fore and aft creaked and groaned, and the blocks rattled, and the wind roared and whistled through the rigging in chorus; and the wild waves rolled and tumbled the big ship about, making her their sport, as if she was a mere cock-boat.

Stronger and stronger blew the gale; darkness came on and covered the world of waters, and through that darkness the ship had to force her way amid the foaming, hissing seas. Darker and darker it grew, till the lookout men declared that they might as well have shut their eyes, for they could scarcely make out their own hands when held at arm’s length before their noses.

Suddenly, however, the darkness was dispelled by the vivid flashes of lightning, which, darting from the low hanging clouds, circled about their heads, throwing a lurid glare on the countenances of all on deck. Once more all was dark; then again the forked lightning burst forth hissing and crackling through the air, leaping along the waves and playing round the quivering masts. Now the big ship plunged into the trough of the sea with a force which made it seem as if she was never going to rise again; but up the next watery height she climbed, and when she got to the top, she stopped as if to look about her, while the lightning flashed brighter than ever; and then, rolling and pitching, and cutting numerous other antics, she lifted up her stern as if she was going to give a vicious fling out with her heels, and downwards she plunged into the dark obscurity, amid the high foam-topped seas, which hissed and roared high above her bulwarks. Her crew walked her deck with but little anxiety, although they saw that the gale was likely to increase into a hurricane; for they had long served together, they knew what each other was made of, and they had confidence in their officers and in the stout ship they manned.

The watch below had hitherto remained in their hammocks, and most of them, in spite of the gale, slept as soundly as ever. What cared they that the ship was roiling and tumbling about? They knew that she was watertight and strong, that she had plenty of sea-room, and that they would be roused up quickly enough if they were wanted. There was one person, however, who did not sleep soundly—that was her Captain, Josiah Penrose. He could not forget that he had the lives of some eight hundred beings committed to his charge, and he knew well that, even on board a stout ship with plenty of sea-room, an accident might occur which would require his immediate presence on deck. He was therefore sitting up in his cabin, holding on as best he could, and attempting to read—a task under all circumstances, considering that he had lost an eye, and was not a very bright scholar, more difficult of accomplishment than may be supposed....