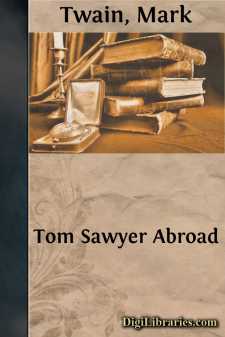 DO you reckon Tom Sawyer was satisfied after all them adventures? I mean the adventures we had down the river, and the time we set the darky Jim free and Tom got shot in the leg. No, he wasn't. It only just p'isoned him for more. That was all the effect it had. You see, when we three came back up the river in glory, as you may say, from that long travel, and the village received us with a torchlight procession and speeches, and everybody hurrah'd and shouted, it made us heroes, and that was what Tom Sawyer had always been hankering to be.

For a while he WAS satisfied. Everybody made much of him, and he tilted up his nose and stepped around the town as though he owned it. Some called him Tom Sawyer the Traveler, and that just swelled him up fit to bust. You see he laid over me and Jim considerable, because we only went down the river on a raft and came back by the steamboat, but Tom went by the steamboat both ways. The boys envied me and Jim a good deal, but land! they just knuckled to the dirt before TOM.

Well, I don't know; maybe he might have been satisfied if it hadn't been for old Nat Parsons, which was postmaster, and powerful long and slim, and kind o' good-hearted and silly, and bald-headed, on account of his age, and about the talkiest old cretur I ever see. For as much as thirty years he'd been the only man in the village that had a reputation—I mean a reputation for being a traveler, and of course he was mortal proud of it, and it was reckoned that in the course of that thirty years he had told about that journey over a million times and enjoyed it every time. And now comes along a boy not quite fifteen, and sets everybody admiring and gawking over HIS travels, and it just give the poor old man the high strikes. It made him sick to listen to Tom, and to hear the people say "My land!" "Did you ever!" "My goodness sakes alive!" and all such things; but he couldn't pull away from it, any more than a fly that's got its hind leg fast in the molasses. And always when Tom come to a rest, the poor old cretur would chip in on HIS same old travels and work them for all they were worth; but they were pretty faded, and didn't go for much, and it was pitiful to see. And then Tom would take another innings, and then the old man again—and so on, and so on, for an hour and more, each trying to beat out the other.

You see, Parsons' travels happened like this: When he first got to be postmaster and was green in the business, there come a letter for somebody he didn't know, and there wasn't any such person in the village. Well, he didn't know what to do, nor how to act, and there the letter stayed and stayed, week in and week out, till the bare sight of it gave him a conniption. The postage wasn't paid on it, and that was another thing to worry about. There wasn't any way to collect that ten cents, and he reckon'd the gov'ment would hold him responsible for it and maybe turn him out besides, when they found he hadn't collected it. Well, at last he couldn't stand it any longer....