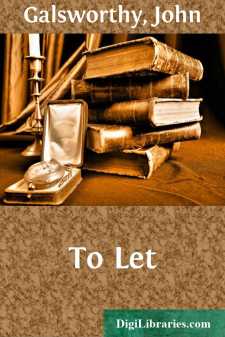 Soames Forsyte emerged from the Knightsbridge Hotel, where he was staying, in the afternoon of the 12th of May, 1920, with the intention of visiting a collection of pictures in a Gallery off Cork Street, and looking into the Future. He walked. Since the War he never took a cab if he could help it. Their drivers were, in his view, an uncivil lot, though, now that the War was over and supply beginning to exceed demand again, getting more civil in accordance with the custom of human nature. Still, he had not forgiven them, deeply identifying them with gloomy memories and, now dimly, like all members of their class, with revolution. The considerable anxiety he had passed through during the War, and the more considerable anxiety he had since undergone in the Peace, had produced psychological consequences in a tenacious nature. He had, mentally, so frequently experienced ruin, that he had ceased to believe in its material probability. Paying away four thousand a year in income and super-tax, one could not very well be worse off! A fortune of a quarter of a million, encumbered only by a wife and one daughter, and very diversely invested, afforded substantial guarantee even against that "wildcat notion"—a levy on capital. And as to confiscation of war profits, he was entirely in favor of it, for he had none, and "serve the beggars right!" The price of pictures, moreover, had, if anything, gone up, and he had done better with his collection since the War began than ever before. Air-raids, also, had acted beneficially on a spirit congenitally cautious, and hardened a character already dogged. To be in danger of being entirely dispersed inclined one to be less apprehensive of the more partial dispersions involved in levies and taxation, while the habit of condemning the impudence of the Germans had led naturally to condemning that of Labor, if not openly at least in the sanctuary of his soul.

He walked. There was, moreover, time to spare, for Fleur was to meet him at the Gallery at four o'clock, and it was as yet but half past two. It was good for him to walk—his liver was a little constricted and his nerves rather on edge. His wife was always out when she was in Town, and his daughter WOULD flibberty-gibbet all over the place like most young women since the War. Still, he must be thankful that she had been too young to do anything in that War itself. Not, of course, that he had not supported the War from its inception, with all his soul, but between that and supporting it with the bodies of his wife and daughter, there had been a gap fixed by something old-fashioned within him which abhorred emotional extravagance. He had, for instance, strongly objected to Annette, so attractive, and in 1914 only thirty-five, going to her native France, her "chere patrie" as, under the stimulus of war, she had begun to call it, to nurse her "braves poilus," forsooth! Ruining her health and her looks! As if she were really a nurse! He had put a stopper on it. Let her do needlework for them at home, or knit!...