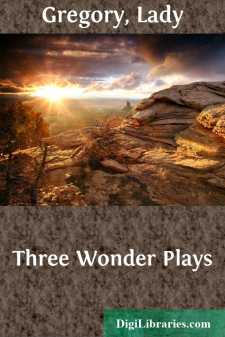 Scene: A room in the King's house at Burren.Large window at back with deep window seat.Doors right and left. A small table and somechairs.

Dall Glic: (Coming in with tray, which he putson table. Goes back to door.) You can come in,King. There is no one here.

King: (Coming in.) That's very good. I wasin dread the Queen might be in it.

Dall Glic: It is a good thought I had bringingit in here, and she gone to give learning to thePrincess. She is not likely to come this side. Itwould be a great pity to annoy her.

King: (Hastily swallowing a mouthful.) Lookout now the door and keep a good watch. Thetime she will draw upon me is when I am eatingmy little bite.

Dall Glic: I'll do that. What I wouldn'tsee with my one eye, there's no other would seewith three.

King: A month to-day since I wed with her, andwell pleased I am to be back in my own place. Igive you word my teeth are rusting with the wantof meat. On the journey I got no fair play. Shewouldn't be willing to see me nourish myself,unless maybe with the marrow bone of a wren.

Dall Glic: Sure she lays down she is but thinkingof the good of your health.

King: Maybe so. She is apt to be paying toomuch attention to what will be for mine and forthe world's good. I kept my health fair enough,and the first wife not begrudging me my enough.I don't know what in the world led me not to stopas I was.

Dall Glic: It is what you were saying, it wasfor the good of the Princess Nuala, and of yourself.

King: That is what herself laid down. Itwould be a great ease to my mind, she was saying,to have in the house with the young girl, a far-offcousin of the King of Alban, and that had beenconversation woman in his Court.

Dall Glic: So it might be too. She is a greatmanager of people.

King: She is that ...I think I hear hercoming.... Throw a cloth over the plates.

King: I thought you were in Nuala's sunnyparlour, learning her to play music and to go throughbooks.

Queen: That is what I thought to do. But Ihadn't hardly started to teach her the principlesof conversation and the branches of relationshipsand kindred of the big people of the earth, whenshe plucked off the coverings I had put over thecages, and set open their doors, till the fiery birdsof Sabes and the canaries of the eastern worldwere screeching around my head, giving out everyclass of cry and call.

King: So they would too.

Queen: The royal eagles stirred up till I mustquit the place with their squawking, and theenchanted swans raising up their heads and peckingat the beadwork on my gown.

King: Ah, she has a wish for the birds of the air,that are by nature light and airy the same as herself.

Queen: It is time for her to turn her mindto good sense. What's that? (Whipping clothfrom tray.) Is it that you are eating again, andit is but one half-hour since your breakfast?