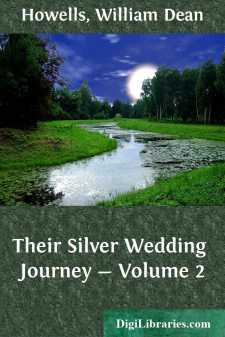 They found Burnamy expecting them at the station in Carlsbad, and she scolded him like a mother for taking the trouble to meet them, while she kept back for the present any sign of knowing that he had staid over a day with the Triscoes in Leipsic. He was as affectionately glad to see her and her husband as she could have wished, but she would have liked it better if he had owned up at once about Leipsic. He did not, and it seemed to her that he was holding her at arm's-length in his answers about his employer. He would not say how he liked his work, or how he liked Mr. Stoller; he merely said that they were at Pupp's together, and that he had got in a good day's work already; and since he would say no more, she contented herself with that.

The long drive from the station to the hotel was by streets that wound down the hill-side like those of an Italian mountain town, between gay stuccoed houses, of Southern rather than of Northern architecture; and the impression of a Latin country was heightened at a turn of the road which brought into view a colossal crucifix planted against a curtain of dark green foliage on the brow of one of the wooded heights that surrounded Carlsbad. When they reached the level of the Tepl, the hill-fed torrent that brawls through the little city under pretty bridges within walls of solid masonry, they found themselves in almost the only vehicle on a brilliant promenade thronged with a cosmopolitan world. Germans in every manner of misfit; Polish Jews in long black gabardines, with tight corkscrew curls on their temples under their black velvet derbys; Austrian officers in tight corsets; Greek priests in flowing robes and brimless high hats; Russians in caftans and Cossacks in Astrakhan caps, accented the more homogeneous masses of western Europeans, in which it would have been hard to say which were English, French or Italians. Among the vividly dressed ladies, some were imaginably Parisian from their chic costumes, but they might easily have been Hungarians or Levantines of taste; some Americans, who might have passed unknown in the perfection of their dress, gave their nationality away in the flat wooden tones of their voices, which made themselves heard above the low hum of talk and the whisper of the innumerable feet.

The omnibus worked its way at a slow walk among the promenaders going and coming between the rows of pollard locusts on one side and the bright walls of the houses on the other. Under the trees were tables, served by pretty bareheaded girls who ran to and from the restaurants across the way. On both sides flashed and glittered the little shops full of silver, glass, jewelry, terracotta figurines, wood-carvings, and all the idle frippery of watering-place traffic: they suggested Paris, and they suggested Saratoga, and then they were of Carlsbad and of no place else in the world, as the crowd which might have been that of other cities at certain moments could only have been of Carlsbad in its habitual effect.

"Do you like it?" asked Burnamy, as if he owned the place, and Mrs. March saw how simple-hearted he was in his reticence, after all. She was ready to bless him when they reached the hotel and found that his interest had got them the only rooms left in the house. This satisfied in her the passion for size which is at the bottom of every American heart, and which perhaps above all else marks us the youngest of the peoples. We pride ourselves on the bigness of our own things, but we are not ungenerous, and when we go to Europe and find things bigger than ours, we are magnanimously happy in them. Pupp's, in its altogether different way, was larger than any hotel at Saratoga or at Niagara; and when Burnamy told her that it sometimes fed fifteen thousand people a day in the height of the season, she was personally proud of it....