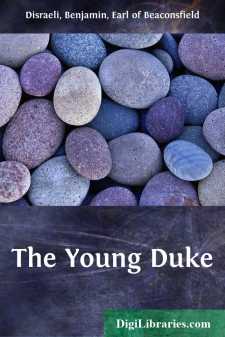 GEORGE AUGUSTUS FREDERICK, DUKE OF ST. JAMES, completed his twenty-first year, an event which created almost as great a sensation among the aristocracy of England as the Norman Conquest. A minority of twenty years had converted a family always amongst the wealthiest of Great Britain into one of the richest in Europe. The Duke of St. James possessed estates in the north and in the west of England, besides a whole province in Ireland. In London there were a very handsome square and several streets, all made of bricks, which brought him in yearly more cash than all the palaces of Vicenza are worth in fee-simple, with those of the Grand Canal of Venice to boot. As if this were not enough, he was an hereditary patron of internal navigation; and although perhaps in his two palaces, three castles, four halls, and lodges ad libitum, there were more fires burnt than in any other establishment in the empire, this was of no consequence, because the coals were his own. His rent-roll exhibited a sum total, very neatly written, of two hundred thousand pounds; but this was independent of half a million in the funds, which we had nearly forgotten, and which remained from the accumulations occasioned by the unhappy death of his father.

The late Duke of St. James had one sister, who was married to the Earl of Fitz-pompey. To the great surprise of the world, to the perfect astonishment of the brother-in-law, his Lordship was not appointed guardian to the infant minor. The Earl of Fitz-pompey had always been on the best possible terms with his Grace: the Countess had, only the year before his death, accepted from his fraternal hand a diamond bracelet; the Lord Viscount St. Maurice, future chief of the house of Fitz-pompey, had the honour not only of being his nephew, but his godson. Who could account, then, for an action so perfectly unaccountable? It was quite evident that his Grace had no intention of dying.

The guardian, however, that he did appoint was a Mr. Dacre, a Catholic gentleman of ancient family and large fortune, who had been the companion of his travels, and was his neighbour in his county. Mr. Dacre had not been honoured with the acquaintance of Lord Fitz-pompey previous to the decease of his noble friend; and after that event such an acquaintance would probably not have been productive of agreeable reminiscences; for from the moment of the opening of the fatal will the name of Dacre was wormwood to the house of St. Maurice. Lord Fitz-pompey, who, though the brother-in-law of a Whig magnate, was a Tory, voted against the Catholics with renewed fervour.

Shortly after the death of his friend, Mr. Dacre married a beautiful and noble lady of the house of Howard, who, after having presented him with a daughter, fell ill, and became that common character, a confirmed invalid. In the present day, and especially among women, one would almost suppose that health was a state of unnatural existence. The illness of his wife and the non-possession of parliamentary duties rendered Mr....