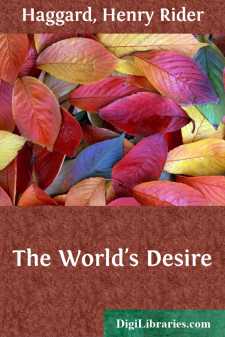 The period in which the story of The World's Desire is cast, was a period when, as Miss Braddon remarks of the age of the Plantagenets, "anything might happen." Recent discoveries, mainly by Dr. Schliemann and Mr. Flinders Petrie, have shown that there really was much intercourse between Heroic Greece, the Greece of the Achaeans, and the Egypt of the Ramessids. This connection, rumoured of in Greek legends, is attested by Egyptian relics found in the graves of Mycenae, and by very ancient Levantine pottery, found in contemporary sites in Egypt. Homer himself shows us Odysseus telling a feigned, but obviously not improbable, tale of an Achaean raid on Egypt. Meanwhile the sojourn of the Israelites, with their Exodus from the land of bondage, though not yet found to be recorded on the Egyptian monuments, was probably part of the great contemporary stir among the peoples. These events, which are only known through Hebrew texts, must have worn a very different aspect in the eyes of Egyptians, and of pre-historic Achaean observers, hostile in faith to the Children of Israel. The topic has since been treated in fiction by Dr. Ebers, in his Joshua. In such a twilight age, fancy has free play, but it is a curious fact that, in this romance, modern fancy has accidentally coincided with that of ancient Greece.

Most of the novel was written, and the apparently "un-Greek" marvels attributed to Helen had been put on paper, when a part of Furtwängler's recent great lexicon of Mythology appeared, with the article on Helen. The authors of The World's Desire read it with a feeling akin to amazement. Their wildest inventions about the Daughter of the Swan, it seemed, had parallels in the obscurer legends of Hellas. There actually is a tradition, preserved by Eustathius, that Paris beguiled Helen by magically putting on the aspect of Menelaus. There is a mediaeval parallel in the story of Uther and Ygerne, mother of Arthur, and the classical case of Zeus and Amphitryon is familiar. Again, the blood-dripping ruby of Helen, in the tale, is mentioned by Servius in his commentary on Virgil (it was pointed out to one of the authors by Mr. Mackail). But we did not know that the Star of the story was actually called the "Star-stone" in ancient Greek fable. The many voices of Helen are alluded to by Homer in the Odyssey: she was also named Echo, in old tradition. To add that she could assume the aspect of every man's first love was easy. Goethe introduces the same quality in the fair witch of his Walpurgis Nacht. A respectable portrait of Meriamun's secret counsellor exists, in pottery, in the British Museum, though, as it chances, it was not discovered by us until after the publication of this romance. The Laestrygonian of the Last Battle is introduced as a pre-historic Norseman. Mr. Gladstone, we think, was perhaps the first to point out that the Laestrygonians of the Odyssey, with their home on a fiord in the Land of the Midnight Sun, were probably derived from travellers' tales of the North, borne with the amber along the immemorial Sacred Way....