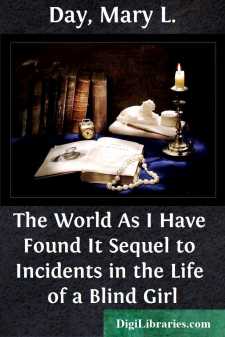 Mrs. Arms has asked me to write an introduction to her book. It hardly seems to need it. The title-page shows that it was written by one who is blind. It is a sequel to another volume. That volume has been widely sold, and all who read it will, I am sure, have some desire to see how the stream of the life of its writer has been flowing since her first book was written. Her patient perseverance under privations has won her a large circle of personal friends, who will take pleasure in procuring and preserving this fresh memento of the Blind Girl.

Such a book as this has a value which, probably, has not occurred to its author. She has put on record the phenomena of her life as she has recollected them, with great simplicity, merely for the entertainment of her readers, without attaching any importance to the value which every such memoir has in the department of science. But it is just from the study of such phenomena as these that the students in mental and moral philosophy learn the laws of mind and the operations of a human soul under a divine, moral government. As a matter of taste we might omit the writer's description of her husband, whom she never yet has seen, p. 45, and her account of her love affairs, p. 49; and if we had discretionary editorship, and the volume had been written by one having always had her sight, we should unhesitatingly exclude such passages. But, as the records of the impressions, consciousnesses and general mental phenomena of a blind girl in love, they stand to be, perhaps, quoted hereafter in some abstruse scientific treatise, or bloom out in some perennial poem.

There is an immediate practical usefulness in such a book as this. It has its wholesome lesson for the young. It shows what strength of character and vigor of purpose will accomplish under even extraordinary embarrassments. The young lady had a hard early life. She had neither friends nor money nor sight, but she unwhiningly took up the task of taking care of herself, and discharged it so nobly as to make for herself a wide circle of friends, and keep for herself that sense of self-reliance as toward man, and of faith as toward God, which are worth more than all the dirty dollars that wickedness can give to weakness.

Let our young women who are in straitened circumstances, in circumstances that seem absolutely exclusive of all hope of retaining virtue and keeping life, read this book and its predecessor, and pluck up faith and hope. Let all our young ladies, daughters of loving parents, daughters who have no care for the morrow, daughters of delicious ease and happy opportunity, read this book, and then let their consciences ask them how they are to carry their idleness to be examined at the judgment sent of Christ, in contrast with this blind girl's industry, fidelity and perseverance.

CHAPTER I. "Warriors and statesmen have their meed of praise,And what they do, or suffer, men record;While the long sacrifice of woman's daysPasses without a thought, without a word:And many a holy struggle for the sakeOf duty, sternly, faithfully fulfil'd;For which the anxious soul must watch and wait,Goes by unheeded as the summer wind,And leaves no memory, and no trace behind!Yet, it may be, more lofty courage dwellsIn one meek heart that braves an adverse fate,Than his whose ardent soul indignant swells,Warmed by the fight, or cheered through high debate.The soldier dies surrounded; could he liveAlone to suffer, and alone to strive?"

So was rendered the sad soul-music of one of the legion,

"Who learned in sorrowWhat they taught in song."

and the weird words have been echoed by the voice of many a woman all along, whose weary wanderings have burned the sacrificial fires; amid the ashes of whose dead hopes the embers have flickered and faded only to rekindle the lurid, lustrous light of added, and still added offerings. There, waiting and watching the deep tracery "upon the sands beside the sounding sea," find wave after wave wash away the mystic hand-writing.

The ebbing tide carries afar the ships freighted with aching, anguished hearts; when borne upon the swell of the flowing sea, come the swift sails of Argosies richly laden with hope, full with fruition.

Within the heart of all there lies deeply imbedded the "Black Drop" of which the Mahometan legend tells, and which the angel revealed to the Prophet of Allah....