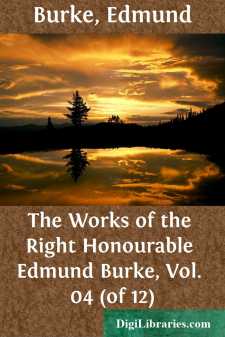 ALETTERTOA MEMBER OF THE NATIONAL ASSEMBLY,INANSWER TO SOME OBJECTIONS TO HIS BOOK ON FRENCH AFFAIRS.1791.

Sir,—I had the honor to receive your letter of the 17th of November last, in which, with some exceptions, you are pleased to consider favorably the letter I have written on the affairs of France. I shall ever accept any mark of approbation attended with instruction with more pleasure than general and unqualified praises. The latter can serve only to flatter our vanity; the former, whilst it encourages us to proceed, may help to improve us in our progress.

Some of the errors you point out to me in my printed letter are really such. One only I find to be material. It is corrected in the edition which I take the liberty of sending to you. As to the cavils which may be made on some part of my remarks with regard to the gradations in your new Constitution, you observe justly that they do not affect the substance of my objections. Whether there be a round more or less in the ladder of representation by which your workmen ascend from their parochial tyranny to their federal anarchy, when the whole scale is false, appears to me of little or no importance.

I published my thoughts on that Constitution, that my countrymen might be enabled to estimate the wisdom of the plans which were held out to their imitation. I conceived that the true character of those plans would be best collected from the committee appointed to prepare them. I thought that the scheme of their building would be better comprehended in the design of the architects than in the execution of the masons. It was not worth my reader's while to occupy himself with the alterations by which bungling practice corrects absurd theory. Such an investigation would be endless: because every day's past experience of impracticability has driven, and every day's future experience will drive, those men to new devices as exceptionable as the old, and which are no otherwise worthy of observation than as they give a daily proof of the delusion of their promises and the falsehood of their professions. Had I followed all these changes, my letter would have been only a gazette of their wanderings, a journal of their march from error to error, through a dry, dreary desert, unguided by the lights of Heaven, or by the contrivance which wisdom has invented to supply their place.

I am unalterably persuaded that the attempt to oppress, degrade, impoverish, confiscate, and extinguish the original gentlemen and landed property of a whole nation cannot be justified under any form it may assume. I am satisfied beyond a doubt, that the project of turning a great empire into a vestry, or into a collection of vestries, and of governing it in the spirit of a parochial administration, is senseless and absurd, in any mode or with any qualifications. I can never be convinced that the scheme of placing the highest powers of the state in church-wardens and constables and other such officers, guided by the prudence of litigious attorneys and Jew brokers, and set in action by shameless women of the lowest condition, by keepers of hotels, taverns, and brothels, by pert apprentices, by clerks, shop-boys, hair-dressers, fiddlers, and dancers on the stage, (who, in such a commonwealth as yours, will in future overbear, as already they have overborne, the sober incapacity of dull, uninstructed men, of useful, but laborious occupations,) can never be put into any shape that must not be both disgraceful and destructive....