The Works of Robert Louis Stevenson - Swanston Edition Vol. 8 (of 25) 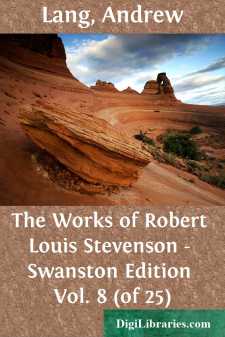 On a certain afternoon, in the late spring-time, the bell upon Tunstall Moat House was heard ringing at an unaccustomed hour. Far and near, in the forest and in the fields along the river, people began to desert their labours and hurry towards the sound; and in Tunstall hamlet a group of poor country-folk stood wondering at the summons.

Tunstall hamlet at that period, in the reign of old King Henry VI., wore much the same appearance as it wears to-day. A score or so of houses, heavily framed with oak, stood scattered in a long green valley ascending from the river. At the foot, the road crossed a bridge, and mounting on the other side, disappeared into the fringes of the forest on its way to the Moat House, and further forth to Holywood Abbey. Half-way up the village, the church stood among yews. On every side the slopes were crowned and the view bounded by the green elms and greening oak-trees of the forest.

Hard by the bridge there was a stone cross upon a knoll, and here the group had collected—half a dozen women and one tall fellow in a russet smock—discussing what the bell betided. An express had gone through the hamlet half an hour before, and drunk a pot of ale in the saddle, not daring to dismount for the hurry of his errand; but he had been ignorant himself of what was forward, and only bore sealed letters from Sir Daniel Brackley to Sir Oliver Oates, the parson, who kept the Moat House in the master’s absence.

But now there was the noise of a horse; and soon, out of the edge of the wood and over the echoing bridge, there rode up young Master Richard Shelton, Sir Daniel’s ward. He, at the least, would know, and they hailed him and begged him to explain. He drew bridle willingly enough—a young fellow not yet eighteen, sun-browned and grey-eyed, in a jacket of deer’s leather, with a black velvet collar, a green hood upon his head, and a steel crossbow at his back. The express, it appeared, had brought great news. A battle was impending. Sir Daniel had sent for every man that could draw a bow or carry a bill to go post-haste to Kettley, under pain of his severe displeasure; but for whom they were to fight, or of where the battle was expected, Dick knew nothing. Sir Oliver would come shortly himself, and Bennet Hatch was arming at that moment, for he it was who should lead the party.

“It is the ruin of this kind land,” a woman said. “If the barons live at war, ploughfolk must eat roots.”

“Nay,” said Dick; “every man that follows shall have sixpence a day, and archers twelve.”

“If they live,” returned the woman, “that may very well be; but how if they die, my master?”

“They cannot better die than for their natural lord,” said Dick.

“No natural lord of mine,” said the man in the smock. “I followed the Walsinghams; so we all did down Brierly way, till two years ago come Candlemas. And now I must side with Brackley! It was the law that did it; call ye that natural? But now, what with Sir Daniel and what with Sir Oliver—that knows more of law than honesty—I have no natural lord but poor King Harry the Sixt, God bless him!—the poor innocent that cannot tell his right hand from his left.”

“Ye speak with an ill tongue, friend,” answered Dick, “to miscall your good master and my lord the king in the same libel....