The works of Guy de Maupassant, Vol. 5 Une Vie and Other Stories 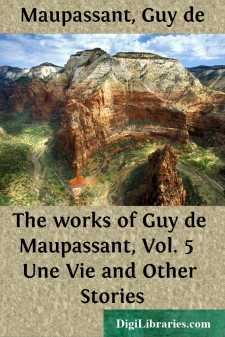 The most robust and masculine of recent French novelists is a typical Norman, sprung from an ancient noble family, originally of Lorraine, but long settled in the Pays de Caux. The traveler from England towards Paris, soon after leaving Dieppe, sees on his left hand, immediately beyond the station of St. Aubin, a handsome sixteenth-century house, the Château de Miromesnil, on a hill above the railway. Here, surrounded by the relics of his warlike and courtly ancestors, Henri René Albert Guy de Maupassant was born on the 5th of August, 1850. He was early associated with the great Norman master of fiction, Gustave Flaubert, who perceived his genius and enthusiastically undertook the training of his intelligence. Through 1870 and 1871 the young man served in the war as a common soldier. He was somewhat slow in taking up the profession of letters, and was thirty years of age before he became in any degree distinguished. In 1879 the Troisième Théâtre Français produced a short play of his, Histoire du Vieux Temps (An Old-World Story), gracefully written in rhyme, but showing no very remarkable aptitude for the stage.

It was in 1880 that De Maupassant was suddenly made famous by two published volumes. The one was a volume of Verses (Des Vers), twenty pieces, most of them of a narrative character, extremely brilliant in execution, and audacious in tone. One of these, slightly exceeding its fellows in crudity, was threatened with a prosecution in law as an outrage upon manners, and the fortune of the volume was secured. The early poems of De Maupassant like those of Paul Bourget, are not without sterling merit as poetry, but their main interest is that they reflect the characteristics of their author's mind. Such pieces as "Fin-d'Amour," and "Au Bord de l'Eau," in the 1880 volume, are simply short stories told in verse, instead of in prose. In this same year, Guy de Maupassant, who had thrown in his lot with the Naturalist Novelists, contributed a short tale to the volume called Les Soirées de Médan, to which Zola, Huysmans, Hennique, Céard and Paul Alexis also affixed their names. He was less known than any of these men, yet it was his story, Boule de Suif (Lump of Suet, or Ball of Fat), which ensured the success of the book. This episode of the war, treated with cynicism, tenderness, humor and pathos mingled in quite a new manner, revealed a fresh genius for the art of narrative. There was an instant demand for more short stories from the same pen, and it was soon discovered that the fecundity and resource of the new writer were as extraordinary as the charm of his style and the objective force of his vision.

It is unnecessary to recount here the names of even the chief of De Maupassant's stories. If we judge them merely by their vivacity, richness and variety, they are the best short tales which have been produced anywhere during the same years. But it is impossible not to admit that they have grave faults, which exclude them from all possible recommendation to young and ingenuous readers. No bibliography of them can be attempted, the publishers of M. Guy de Maupassant having reprinted his lesser stories so frequently, and with such infinite varieties of arrangement, that the positive sequence of these little masterpieces has been hopelessly confused. Three stories in particular, however, may be mentioned, La Maison Tellier, 1881; Les Sœurs Rondoli, 1884, and Miss Harriett, 1885, because the collections which originally bore these names were pre-eminently successful in drawing the attention of the critics to the author's work.

It was not until he had won a very great reputation as a short story-teller, that De Maupassant attempted a long novel. He published only six single volume stories, all of which are included in the present edition. The first was Une Vie (A Life), 1883, a very careful study of Norman manners, highly finished in the manner of Flaubert, whom he has styled "that irreproachable master whom I admire above all others." In certain directions, I do not think that De Maupassant has surpassed Une Vie, in fidelity to nature, in a Dutch exactitude of portraiture, in a certain distinction of tone; it was the history of an unhappy gentlewoman, doomed throughout life to be deceived, impoverished, disdained and overwhelmed....