The Wife of Sir Isaac Harman 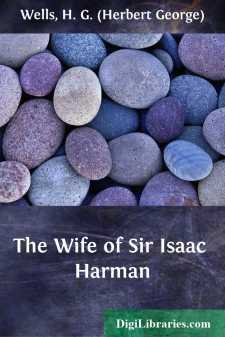 The motor-car entered a little white gate, came to a porch under a thick wig of jasmine, and stopped. The chauffeur indicated by a movement of the head that this at last was it. A tall young woman with a big soft mouth, great masses of blue-black hair on either side of a broad, low forehead, and eyes of so dark a brown you might have thought them black, drooped forward and surveyed the house with a mixture of keen appreciation and that gentle apprehension which is the shadow of desire in unassuming natures....

The little house with the white-framed windows looked at her with a sleepy wakefulness from under its blinds, and made no sign. Beyond the corner was a glimpse of lawn, a rank of delphiniums, and the sound of a wheel-barrow.

Clarence, with an air of exceeding his duties, decided to hear, descended slowly, and came to the door.

"Very likely—if you were to look for a bell, Clarence...."

Clarence regarded the porch with a hostile air, made no secret that he thought it a fool of a porch, seemed on the point of disobedience, and submitted. His gestures suggested a belief that he would next be asked to boil eggs or do the boots. He found a bell and rang it with the needless violence of a man who has no special knowledge of ringing bells. How was he to know? he was a chauffeur. The bell did not so much ring as explode and swamp the place. Sounds of ringing came from all the windows, and even out of the chimneys. It seemed as if once set ringing that bell would never cease....

Clarence went to the bonnet of his machine, and presented his stooping back in a defensive manner against anyone who might come out. He wasn't a footman, anyhow. He'd rung that bell all right, and now he must see to his engine.

"He's rung so loud!" said the lady weakly—apparently to God.

The door behind the neat white pillars opened, and a little red-nosed woman, in a cap she had evidently put on without a proper glass, appeared. She surveyed the car and its occupant with disfavour over her also very oblique spectacles.

The lady waved a pink paper to her, a house-agent's order to view. "Is this Black Strands?" she shouted.

The little woman advanced slowly with her eyes fixed malevolently on the pink paper. She seemed to be stalking it.

"This is Black Strands?" repeated the tall lady. "I should be so sorry if I disturbed you—if it isn't; ringing the bell like that—and all. You can't think——"

"This is Black Strand," said the little old woman with a note of deep reproach, and suddenly ceased to look over her glasses and looked through them. She looked no kindlier through them, and her eye seemed much larger. She was now regarding the lady in the car, though with a sustained alertness towards the pink paper. "I suppose," she said, "you've come to see over the place?"

"If it doesn't disturb anyone; if it is quite convenient——"

The lady stood up in the car, a tall and graceful figure of doubt and desire and glossy black fur....